Was Every Single Nazi Mentally Ill?

I woke up on Sunday morning to the news of yet another mass shooting. It wasn’t the one in El Faso Texas that I went to bed hearing about. It was yet another one –  this time in Dayton Ohio.

After texting to check on the safety of a college roommate and her family, who live in Dayton, I almost thew up.

I’m not exaggerating. I was literally sick to my stomach.

I felt completely powerless and angry.

When a friend called to check on me, she expressed the same thoughts. She was on her way to church and said she’d be praying.

“Pray that people actually elect leaders who care more about people than they do about money.” I said. “Because right now? They obviously don’t.”

We are both furious at the NRA, which is all about ensuring the gun industry continues to make money, that ignorant people fall for its propaganda, and that politicians remain in its pockets.

The current resident of the White House is no exception. Like so many politicians who think they need the support of the NRA, he’s pointing his fingers at mental illness and not at a problem with gun availability. In fact, too many so-called leaders do everything they can to avoid addressing the fact that there is a huge gap between responsible gun ownership and arming citizens with semi-automatic weapons. If they did, they’d be admitting there is plenty of opportunity for compromise. 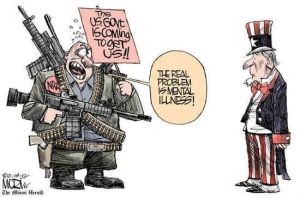 In all the history books I’ve read, I don’t remember one that claimed America’s sordid history of racism is linked to mental illness. Can you imagine claiming that every member of the Klu Klux Klan or of a lynch mob was diagnosable? They weren’t. They were full of hate and fear.

The reign of terror carried out by the Nazi’s prior to and during World War II wasn’t linked to mental illness.  Sure, the case can be made that Adolf Hitler was mentally ill, but not every single Nazi. They were full of hate and fear.

And now, do we claim that every perpetrator of domestic violence or that every racist is mentally ill? No. They too are simply full of hate and fear.

I can’t predict the future, but I do know that our present times will soon be history. And I can only hope that my grandchildren don’t have to read about how mass shootings became an acceptable risk of every day life. Instead, I hope they read about how concerned and compassionate citizens refused to let corporate interests control America and voted out the politicians who allowed that to happen.

Let Go of the Tide Pods and Listen to Our Children 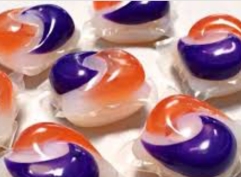 According to a teenager in the know, “Tide Pods are a really old thing. Why are you writing about them?”

My reply? “It might be a really old thing for your generation, but adults won’t let it go.”

The response was a look. Not just a look. It was “the” look. You know the one parents often get for being completely ridiculous, or embarrassing or just plain out of touch with reality.

That look made my point more than any words I can write.

Adults aren’t always right. Many of us  might have war chests of experiences, but that doesn’t mean our perceptions are always right. The number of years we’ve lived doesn’t count for everything and can sometimes get in the way of seeing and hearing the truth.

And the truth is that the majority of teenagers thought that the Tide Pod challenge (which, as a reminder, is to them ancient history) was really stupid. They never tried to eat Tide Pods, and they don’t want to be lumped in with the few highly publicized groups of teens that did.

And yet, some adults are doing just that.

Last weekend, as I and millions of other Americans, cheered for and cried with the youth who led the March for Our 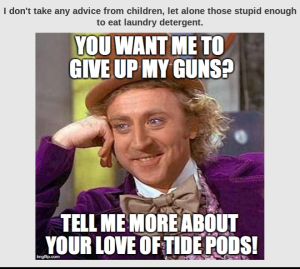 Lives against gun violence, some adults were posting rude memes on social media. I saw several versions of them, but the message was basically the same: We shouldn’t listen to our youth because they eat Tide Pods.

And then there were the ones comparing the teens to Hitler Youth.

Those actually made me nauseous.

This effort to discredit our youth was repeated throughout the week in various ways. And it was indecent.

No matter what your opinion about gun safety, ridiculing, belittling and dismissing our youth isn’t just horrible. It’s harmful.

Research shows that youth must feel valued by adults. It is essential to ensuring they grow into healthy and engaged adults. And yet, The Search Institute indicates that only 25% of all youth feel they are valued by their community.

I can’t imagine the vitriolic memes and rhetoric are helping.

None of us are going to agree with everything the next generation says and does. But that doesn’t mean they don’t have anything of value to contribute to the conversation.

After all, they are the ones who know that the Tide Pod Challenge is ancient history. And posting anything otherwise only makes the adults appear to be the ones out of touch with reality.

The Insanity of All This Violence is Driving Me Crazy

Just over two weeks ago, while families gathered to watch Fourth of July fireworks at a park less than a mile from my home, a gun was fired. In addition to shooting the intended victim, the gunman also shot and injured an eight year-old girl.

Just two days ago, a man opened fire in a crowded movie theater in Aurora, Colorado, He killed 12 people and injured dozens more.

While one incident was right down the street and the other was across the country, my initial reaction to both was the same. I wanted to hug my children and thank God they were safe.  And then I wanted to scream about the insanity of it all: “Why does such senseless violence keep occurring and, even worse, why is it creeping into my world?”

In “my world,” the only violence we ever witness is in the form of entertainment: on television, in the movies and in video games. It’s not a place where people have to fear actual violence.

In “my world,” safe neighborhoods are easily defined, and we avoid violence by avoiding unsafe locations. It’s not a place where my daughter’s friends tell her “that shooting at the park was in my backyard.”

In “my world,” guns are used for hunting animals and shooting targets – not for shooting people. It’s not a place where people use violence to resolve a dispute or share their rage with the world.

In “my world,” when a horrible crime does occur, we rally around and pray for the victims and their families. It’s not a place where, only hours after a shooting, we try to turn a tragic event into a political advantage.

But I’ve come to realize that “my world” is a complete fantasy, but it’s a fantasy I also want my children to believe.

On July 5, I was driving by the park where the shooting had occurred only hours before. My daughter, sitting in the passenger seat, noticed all the people picnicking and swimming and asked “why are those people even at that park? Don’t they know it’s dangerous.?”

She was talking about a park that she has walked to and played in hundreds of times: a park where I walk my dog every day: a park that is the gathering place for most community events in my town.

And so, I told her that the shooting was an isolated incident and she shouldn’t worry or avoid the park.

What I didn’t tell her was that if we tried to avoid every place where there’s been gun violence, our options would be very limited. At the time, movie theaters weren’t even on my radar.

But theaters are creeping onto my worry list now.

Just last night, while my daughter was performing in a local production of “The Wizard of Oz,” the alarms in the theater unexpectedly went off.

The alarm was turned off, my concerns ebbed and I went back to the fantasy of “my world.” It’s actually a very nice place, and I like living there. If I didn’t, I’d go crazy with worry.

Sadly, I’m having to leave it more and more often. And until we stop arguing about solutions and actually start working together, “my world” never will be a reality.