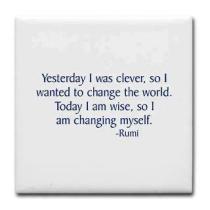 I used to believe that as we matured, we grew out of our need for simple story lines. The fairy tales we enjoyed as children generally featured characters who were all good or all bad.

As we got older and our brains matured from concrete to abstract thinking, we realized that people and situations are complicated and that life comes at us in a broad spectrum of colors – not just black and white.

That was the paradigm in which I used to believe.

For whatever reason, I sometimes forget there are too many people who have unrealistically simple views of the world.

And then life hands me a great big dose of a reality and I am left dumbstruck at how people can justify being judgmental by painting human behavior with broad brushes of right and wrong, good or bad and deserving and undeserving,

Even worse are the people who think they have THE answer for eliminating such complicated issues as poverty and violence.

Just this past week, a colleague asked an individual who works at an organization that serves low-income families what these families need to help them improve their situation. Instead of thoughtful dialogue, the individual began to rant about all the families that “abuse the system.”

Then he suggested that we stop rewarding women for getting pregnant so they can access to benefits.

Call me naïve, but I am highly doubtful that most baby-making situations are the direct result of a female thinking she will be financially secure if she has a baby.

With that said, I’m equally sure that there are women who aren’t concerned about getting pregnant because someone, be it the system or a grandparent or perhaps the father, will step up to help with the situation.

And not every mother was single or lacked income when she got pregnant. People lose their jobs, and finding child care is difficult for those who do shift work. People face financial problems because of mental or physical illness every day. Relationships fall apart. Some women are brave enough to leave an abusive relationship only to face financial hardships.

Do you see what I mean about being complicated?

But people who prefer simplistic answers don’t want to consider complicated. They want to devalue the worth of single mothers or low-income families who experience generational poverty.

But my complicated (or mature?) mind can’t understand that way of thinking. Instead, I believe that we are all imperfect humans who have a relatively short time on earth. Some of us are born into better circumstances than others. Some of us had parents who nurtured us and helped our brains develop appropriately. Some of us had role models and grew up in homes where chaos was unusual and unacceptable.

In other words, some of us were just plain lucky, and last I checked, lucky and worthy are two entirely different concepts.

Life is not fair, and instead of wasting precious time and energy trying to balance the scales of fairness (something even my children know will never happen), we should spend our time and energy cheering on and supporting our fellow humans.

That doesn’t mean we should accept that people live poverty or that they have no responsibility for trying to improve their situation – they do. But that does mean that we should provide opportunities to help them improve, and, more importantly, we shouldn’t judge.

Often, that doesn’t involve changing circumstances or rules for other people. That involves changing ourselves.

That’s not easy. In fact, it’s rather… complicated.

Years ago, someone said words that have always resonated with me:  “There will always be people who resist change no matter what it is. At the other end of the continuum are people who want change just for the sake of change. To be successful, you just need to focus on the people in the middle.”

Sometimes, I am the person in the middle;  I know change will be good, but I want to make sure the change is the right one.

Sometimes, it is, and sometimes it isn’t.

But no matter what, when change occurs, it is always an adventure.

What Remains in the Field

Instead, change is a slow and steady process that occurs minute by minute and day by day. And because the changes occur so slowly, they go unnoticed until they are indisputable.

I spent decades earning the crow’s feet around my eyes and the laugh lines around my mouth, but until recently I didn’t notice them. Then one morning, they were simply there in the mirror, and I realized that I’m not the same person I was 20 or 30 years ago.

I’m not completely different. I’ve always talked too much, laughed too loud and expressed my feelings too quickly. But I am also more confident, less likely to waste my time on petty people and petty issues and more appreciative of all life has to offer.

Time changes everything, and we can either adapt or languish. 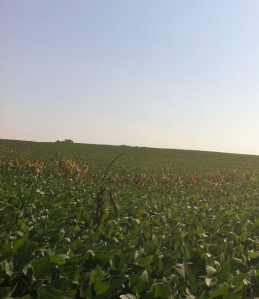 There’s no greater reminder of this than a farmer’s field.

Last summer, the fields where I ride my bike were full of corn. This spring, they were full of hay. And now they are full of soybean.

But they, like people, still hold on to pieces of their past.

In one of the fields, brown stalks of corn shoot above the green plants. All of the stalks stand in a row with the exception of one obstinate single stalk. The corn isn’t healthy and, at a glance, has absolutely no purpose.

But it serves a purpose to me.

Every day as I ride by, I am reminded that the stalks are remains of a field that once grew strong and healthy corn: a field that was cultivated and served its purpose and now serves a different purpose. And the current field wouldn’t be the same if the corn hadn’t once been there. 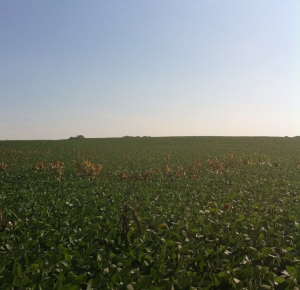 That corn represents my past: the decisions I’ve made, the words I’ve spoken and the relationships I’ve had. The stalks are like my memories. They remind me that I am the person I am today only because of the person that I used to be.

The remains in the field hold no regrets. They simply hold the power to remind me to remain grounded and remember my roots while never failing to change and grow.

I think I’ll take that advice.