Let Go of the Tide Pods and Listen to Our Children

According to a teenager in the know, “Tide Pods are a really old thing. Why are you writing about them?”

My reply? “It might be a really old thing for your generation, but adults won’t let it go.”

The response was a look. Not just a look. It was “the” look. You know the one parents often get for being completely ridiculous, or embarrassing or just plain out of touch with reality.

That look made my point more than any words I can write.

Adults aren’t always right. Many of us  might have war chests of experiences, but that doesn’t mean our perceptions are always right. The number of years we’ve lived doesn’t count for everything and can sometimes get in the way of seeing and hearing the truth.

And the truth is that the majority of teenagers thought that the Tide Pod challenge (which, as a reminder, is to them ancient history) was really stupid. They never tried to eat Tide Pods, and they don’t want to be lumped in with the few highly publicized groups of teens that did.

And yet, some adults are doing just that.

Last weekend, as I and millions of other Americans, cheered for and cried with the youth who led the March for Our

Lives against gun violence, some adults were posting rude memes on social media. I saw several versions of them, but the message was basically the same: We shouldn’t listen to our youth because they eat Tide Pods.

And then there were the ones comparing the teens to Hitler Youth.

Those actually made me nauseous.

This effort to discredit our youth was repeated throughout the week in various ways. And it was indecent.

No matter what your opinion about gun safety, ridiculing, belittling and dismissing our youth isn’t just horrible. It’s harmful.

Research shows that youth must feel valued by adults. It is essential to ensuring they grow into healthy and engaged adults. And yet, The Search Institute indicates that only 25% of all youth feel they are valued by their community.

I can’t imagine the vitriolic memes and rhetoric are helping.

None of us are going to agree with everything the next generation says and does. But that doesn’t mean they don’t have anything of value to contribute to the conversation.

After all, they are the ones who know that the Tide Pod Challenge is ancient history. And posting anything otherwise only makes the adults appear to be the ones out of touch with reality.

Getting Real About Giving Thanks

This Thursday will be my 47th Thanksgiving, which means I’ve had a great deal of experience hearing people give thanks for family and health and God.

I’m not questioning their gratitude.

I too am thankful for those gifts.

I’m also thankful for hot showers, coffee, the internet, my car’s heated seats, wine, Netflix and a husband who sends me roses when he knows he’s made me mad. And I’m not going to feel selfish for saying so.

There is, after all, something to be said for heartfelt thanks, such as that expressed by my fourth grade classmates  in November 1976.

I re-discovered their gratitude recently when I flipped through a childhood scrapbook and found a booklet from that year.

In those days before word processing, personal computers and printers, my teacher typed her  students’ responses to the question “What are you grateful for this Thanksgiving?” Later, she gave each of us a mimeographed  copy of our responses. 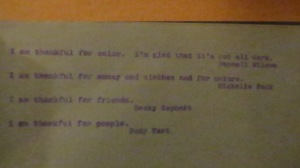 In reviewing the gratitude in that booklet, I am completely in awe of the wisdom of a group of fourth grade students in a rural community in 1976.

We knew to be thankful for our bicycles and birthdays and toys.

We  knew to be thankful for teachers and doctors and friends. 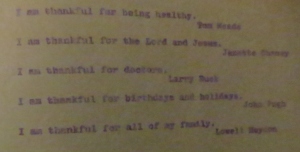 And we even knew to  appreciate beauty in the world, the support we gave each other and even ourselves.

Reading the words of a group of children who are now middle-aged adults marked by the scars of experience, I can’t help but smile and recognize something else for which I am extremely grateful.

Posted in My life, people, perspective

Life is comprised of millions of moments.

The moments that make headlines either tell us about events that will affect us or are intended to engage or entertain us.

But the moments that help shape who we are and who we are becoming are often less dramatic or public. But sometimes they are, and in those rare occasions, they might get a brief nod in the back pages of a newspaper.

Such were the events of last Friday night.

Anyone who attended the Spring Mills High School football on Friday night probably recognized the events had everything a good Hollywood script requires, including an ordinary beginning.

Students, parents and community members trickled into the stadium to the sounds of rock music. The football team, cheerleaders and band warmed up. And the announcers checked the sound system.

The only thing outwardly unusual about this Friday night was the biting cold and the students who came dressed in costumes.

“It’s the last football game before Halloween,’ the younger sibling of one student told me. “Of course they are going to dress in costume.” She then puffed up a bit. “My sister is the one in the poodle skirt.”

When the band played the national anthem, the whole stadium was unusually silent. Even the younger students who are generally unruly, paid tribute. Later, when a boy didn’t have enough money to buy a hot chocolate at the concession stand, an adult offered him change. The boy looked at him in awe and said, “thank you, sir,” at least three times.

And then there was the game itself.

Spring Mills High School, which has no senior class and, until Friday, had never won a football game, scored 14 points in the first half.

The other team didn’t score anything.

For the first time since August, our team had hope.

During the third quarter, the other team tied the score, and that hope began to diminish until Spring Mills scored another touchdown.

As the final seconds of the game ticked down, the energy in the frigid stadium went up. When the final buzzer sounded, the student body rushed the football field and celebrated for a long, long time.

But, for the first time ever, as it marched off the field after a football game, the band played in celebration. The band parents in the concession stand stopped what we were doing and started clapping and cheering and crying.

The moment was movie perfect until the young girl, who hours before had bragged her sister was wearing a poodle skirt, came back. In child-like innocence she said, “Did you see the other team? The looked so sad when they left the field, Their heads were hanging down.”

For an instance, I felt guilty about all the jubilation.

But then, I realized we weren’t really celebrating our defeat of another team or the points on the scoreboard. We were celebrating the community we are becoming. For the first time, we had collectively experienced a memory that will stay with us the rest of our lives.

There were no reporters and television crews at the game, and the victory received only a brief mention in the local newspaper.

But for those of us who were there, the script for that evening unfolded in a way usually reserved only for movies, and we will all carry that perfect movie moment with us forever.