Pictures at the Porta Potty 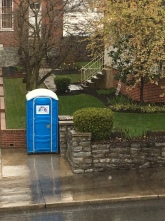 Some people would have been offended by the text message I received yesterday morning:  “Every time I see a porta potty, I think of  you, Trina.”

That text was quickly followed by one from the other person in the group: “Me too.”

But I wasn’t upset. Instead, I texted back “It’s my legacy.”

And I wasn’t kidding.

For the past few weeks, a porta potty has literally been keeping me sane during long, stressful hours at the office. And i

t hasn’t just been a constant source of entertainment, it’s been a reminder about humanity and finding joy wherever we can.

When the porta potty first appeared outside the Catholic Church directly across the street from my office, I was confused. I wasn’t sure if the church was providing a new public service or was having plumbing issues.

As it turns out, it was both.

The church is having its bathrooms renovated, and the porta potty is th

And while I’m fairly certain it was never intended to be a social gathering place, I am absolutely convinced no one thought it would become a source of entertainment. Yet,that is exactly what it has provided for me and my colleagues. (Although I have no doubt that they are more entertained by my obsession with it as they are with what is actually happening across the street.). 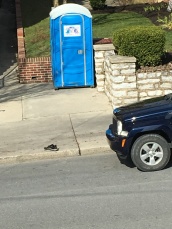 m not the only one who has become fascinated by its popularity. While I was pondering why it had become a social gathering place, one of my colleagues had started a running tally of all of the random people using it.

We also wondered about the shoe lying outside of it on a Monday morning, which prompted a story
about a wine bottle that had been in that same space during church services the day before. We watched municipal employees and homeless individuals take advantage of the same service.

One day, we noticed that the trash cans lined up near it re 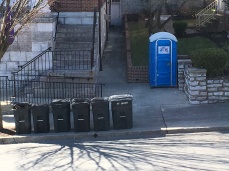 sembled the children in the “Sound of Music” singing at the command of, well Maria Van Porta Potty.

The rest of the office was highly amused the day I cringed in embarrassment after two men looked up at my window and waved  as I snapped yet another picture with my phone.

But, most importantly, we’ve laughed at our (my?)  obsession with the blue box across the street.

And I’ve  needed those laughs.

My job involves working with people who are already disenfranchised at a time when they are being threatened and marginalized more than ever. The office budget is tight and getting tighter. I have to deal with tough situations and difficult people on a daily basis. And yet, that porta potty has provided several reminders:

I know the porta potty will soon disappear from my life, but something tells me I’ll find some other source of entertainment. It is, after all, a matter of survival.

Posted in My life, Work

Life is comprised of millions of moments.

The moments that make headlines either tell us about events that will affect us or are intended to engage or entertain us.

But the moments that help shape who we are and who we are becoming are often less dramatic or public. But sometimes they are, and in those rare occasions, they might get a brief nod in the back pages of a newspaper.

Such were the events of last Friday night.

Anyone who attended the Spring Mills High School football on Friday night probably recognized the events had everything a good Hollywood script requires, including an ordinary beginning.

Students, parents and community members trickled into the stadium to the sounds of rock music. The football team, cheerleaders and band warmed up. And the announcers checked the sound system.

The only thing outwardly unusual about this Friday night was the biting cold and the students who came dressed in costumes.

“It’s the last football game before Halloween,’ the younger sibling of one student told me. “Of course they are going to dress in costume.” She then puffed up a bit. “My sister is the one in the poodle skirt.”

When the band played the national anthem, the whole stadium was unusually silent. Even the younger students who are generally unruly, paid tribute. Later, when a boy didn’t have enough money to buy a hot chocolate at the concession stand, an adult offered him change. The boy looked at him in awe and said, “thank you, sir,” at least three times.

And then there was the game itself.

Spring Mills High School, which has no senior class and, until Friday, had never won a football game, scored 14 points in the first half.

The other team didn’t score anything.

For the first time since August, our team had hope.

During the third quarter, the other team tied the score, and that hope began to diminish until Spring Mills scored another touchdown.

As the final seconds of the game ticked down, the energy in the frigid stadium went up. When the final buzzer sounded, the student body rushed the football field and celebrated for a long, long time.

But, for the first time ever, as it marched off the field after a football game, the band played in celebration. The band parents in the concession stand stopped what we were doing and started clapping and cheering and crying.

The moment was movie perfect until the young girl, who hours before had bragged her sister was wearing a poodle skirt, came back. In child-like innocence she said, “Did you see the other team? The looked so sad when they left the field, Their heads were hanging down.”

For an instance, I felt guilty about all the jubilation.

But then, I realized we weren’t really celebrating our defeat of another team or the points on the scoreboard. We were celebrating the community we are becoming. For the first time, we had collectively experienced a memory that will stay with us the rest of our lives.

There were no reporters and television crews at the game, and the victory received only a brief mention in the local newspaper.

But for those of us who were there, the script for that evening unfolded in a way usually reserved only for movies, and we will all carry that perfect movie moment with us forever.

During my freshman year of college, an unexpected rainstorm hit the night before finals. 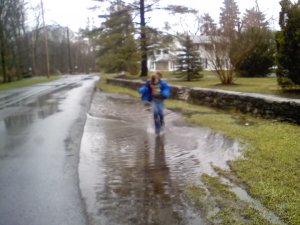 While my fellow students and I crammed random bits of knowledge into our brains, the rain beat down.

When the rain passed, darkness had already arrived. But that didn’t stop us from taking a break from studying to enjoy what the storm had left in its wake: puddles.

Even in those days before cells phones and the internet, college students still managed to communicate with each other. That night, hundreds of us ran out of the dorms and the library to work off stress by jumping in puddles.

We splashed and screamed with the same joy we had when we were little children.

I like to believe that, even though we are all in our mid to late forties now, some of us still remember to do that from time to time.

Because jumping in puddles always makes me smile.

Day 3: The Ride Downhill after the Struggle Uphill