If you don’t know anything about “the welfare system,” then drug testing “people on welfare” makes sense.

After all, your hard-earned taxpayer dollars are being used to support “people on welfare.”

Even on days when you don’t want to go to work, you show up because that is what is required for you to bring home a regular paycheck. Obviously, “people on welfare” are looking for an easier way to get money.

To ensure that no one “on welfare” is using our money to buy drugs, then we have to drug test them. That way we won’t be wasting taxes, right?

The seemingly ongoing demand and state jumping on the drug testing band wagon isn’t based on facts and statistics but rather on prejudice, stereotypes and misinformation about “the welfare system.” 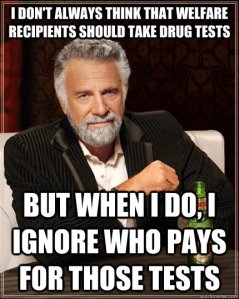 It’s also a waste money. Requiring drug tests for individuals who receive social services benefits has consistently been shown to increase administrative costs with little else to show for the efforts.

When the State of Tennessee started testing individuals who applied for Temporary Assistance to Needy Families (TANF), only 37 out of more than 16,000 applicants failed drug tests during a six month period.  Those results weren’t much different from those in other states, such as Utah and Florida.

I don’t know what the cost of administering those tests was, but I do know there is no way that those results can be spun to indicate cost-effectiveness. But then, the outcry for drug-testing people who receive TANF has never really been about cost-effectiveness or even helping families with drug addiction.

It has always been about pointing fingers at low-income people and blaming them for their circumstances. 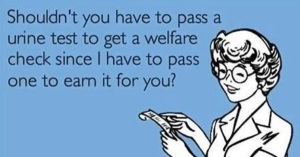 Despite public perception that “people on welfare” are lazy and don’t do much to contribute to society, the life of people who receive TANF isn’t all that restful. First they have children to raise.

TANF, which was established during the Clinton administration, is only available to families with children. It also requires recipients to participate in programs that help them learn skills and gain employment. In West Virginia, TANF recipients are required to sign a personal responsibility contract which they have to follow or they will lose benefits.

Even if they do all that is required of them, federal law prohibits them from receiving  more than 60 months of assistance during a lifetime.

For a small amount of cash assistance (in West Virginia, a family of four receives an average amount of about $385 each month), TANF recipients must go to classes, do volunteer work and actively seek employment. Studies show that the average time any individual receives TANF is 24 months, and that is usually the result of unfortunate circumstances like the loss of a job or divorce.  Much like an insurance policy, TANF was available to these individuals who had been taxpayers but fell in tough times until they could once again be taxpayers.

I have many more friends who never used TANF  not because they never had financial difficulties but because they had the resource friends and family to help them through the crisis. Not everyone is surrounded by people who have the resources to help.

But even when we look beyond the stereotypes about who receives TANF, there are even bigger issues.. For example,what happens when someone does test positive for drugs? What will happen to their children (since they must have children to even receive the assistance.) Just as critical, who will be responsible for treatment and recovery services? In my community, those services are usually unavailable and inaccessible to low-income and rural individuals. Advocates have been complaining for years about the lack of treatment programs. Before we focus on drug testing anyone, we must  have the community capacity to help those who struggle with addiction.