← The Update
Without Clock or Calendar →

That Place You Belong

The  senior high school student walked into the concession stand with tears in her eyes.

“This is my second to last football game ever,” she said. “It is all ending too fast.”

I empathized with her.

I too can sense time slipping away too quickly. It has the the strange ability to swiftly turn every moment into a mere memory regardless of our desire for meaningful moments to linger a little longer than normal.

Just last year, I openly cried as I watched my son’s friends and their parents march onto the football field for senior night. As they announcer said their names and their future plans, my chest tightened, my eyes watered and I felt a sense of dread. I knew that in exactly one year, I would be doing the same.

This past Friday night, my husband and I stood on the edge of the high school football field, were handed flowers and given instructions to escort our son for recognition during the last home football game of his high school career.

Despite all of my concerns that my overly emotional tendencies would sabotage the moment, I didn’t get a bit nostalgic. I was too busy laughing.

I should have known my son wouldn 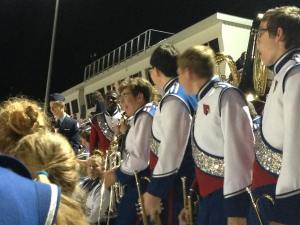 ‘t take the moment too seriously, and my suspicions grew stronger when other parents were handed a sheet of paper with all of the information that the announcer was going to read about their child. My son snatched his paper out of my hands with a smirk on his face then stuffed it down his pants (his band uniform doesn’t have pockets). I had no opportunity to see his written words prior to their being proclaimed over the loudspeaker for hundreds of people.

My son’s best friend, who was directly behind us in line, started laughing.

“I can’t wait until they read yours,” he told my son.

Since we were lined up in alphabetical order and my husband and I decided not to complicate our children’s lives with hyphenated last names, we were near the end with the last name of Snyder.

That meant we had plenty of time to listen to the impressive future plans and meaningful expressions of support from my son’s classmates.

It also meant that, instead of feeling nostalgic or the least bit weepy, I was overwhelmed with a sense of curiosity about what my son had said.

Finally, his time in the limelight arrived.

At first, my son’s moment of recognition was similar to that of his classmates. He mentioned his future plans – or what he thinks they will be – and his appreciation of the friends, teachers and family for their support.

That’s when normal ended for him.

He also extended his appreciation to Goku from Dragon Ball Z (I have no idea) and the people who invented hot wing flavored-Doritos (I don’t understand).

While my initial reaction was to do a face palm, I soon realized that other people appreciated that at least one senior hadn’t said what was expected. The people in the stands were applauding and cheering as my son stepped away from my husband and me to take a bow.

The cheers and applause got louder.

At that moment, I realized that my son is in an incredibly different place than I was at his age.

While I was seeking the place where I belonged, my son simply creates his.

Not everyone appreciates his off-the-wall humor or his need to make light of every situation, but that doesn’t bother him.

He creates moments instead of waiting for them to happen or lamenting their loss.

He innately knows that for every milestone that passes, another one is on the horizon. He also knows that waiting for milestones isn’t enough. Every minute can be a moment if you decide to seize it rather than stand back and watch.

He is only three months into his senior year of high school. Between now and May, I have no doubt that there will be times when I get weepy and nostalgic as the final chapter of his childhood comes to an end.

But I also have no doubt that the laughter and smiles will outnumber the tears.

Because that’s what happens when you are in the place where you belong.

← The Update
Without Clock or Calendar →