← Fools On An Artificial Ladder
Collecting Tiny Pieces of the Soul →

A Country Road, a Locked Gate and Barriers to Endless Possibilities 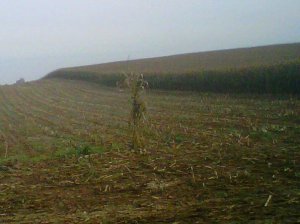 I can be pretty slow at times, especially when I ride my bike.  But that’s not necessarily a bad thing.  As the only person actually peddling on a road where others are simply pushing a gas pedal, I notice a lot.

For the past couple years, I’ve been regularly riding on a country road that gives me a great deal to think about:

A plowed cornfield with only one stalk left standing;

A barn with what appears to be an old American flag I can’t identify; 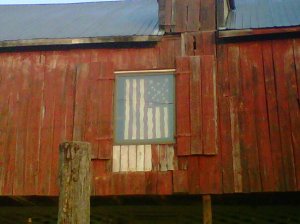 And a gate that, for all I can tell,  is completely ineffective.

The gate crosses a gravel road that runs between two fields.  Until this week, green stalks of corn filled one of the fields, while the other had no discernible crop. This week, both were plowed. So the road now runs, and eventually dead ends, between two muddy, empty fields.

Other than providing farm workers easy access to the fields, the road doesn’t serve much purpose. It certainly doesn’t lead anywhere interesting or provide enough privacy to be a lovers’ lane. Because of that, the importance of  a locked gate with a fading private property sign eludes me.  Since there is no fence on either side, the gate isn’t really preventing anyone from simply driving around it.

After passing the gate day after day, I finally took a picture and posted it on Facebook with a question about its purpose.  I got a variety of responses ranging from people who took the question seriously to those who didn’t.

The general consensus was that there had probably  been fences around the fields at some point.  When they were torn down, the gate stayed to mark private property.

While this concept still puzzles me, it also reminds me of human behavior in general:  we often tear down fences but leave gates standing.

We say we believe in equal rights and demonstrate this by tearing down barriers for others. Yet we still leave up gates to protect what we believe we earned or deserve and fear others may access or take away.  Sometimes these gates are words. Sometimes they are the policies we support. And sometimes they are even religious beliefs.

But whatever the reason, the gates are there.  And, just liked the locked gate I pass every day on my bike, they provide a false sense of security for some and serve as a challenge for others.

At times, I know I’ve protected my own gates. But the rebel in me also spends a lot of time thinking about how to get around gates.  And I admit, there have been many times when riding my bike on the country road, I’ve been tempted to ride around the gate. The silliest thing is I would have no desire to ride on the gravel road if the gate weren’t there. I certainly don’t want to cause any problems or do any damage.

But then, I don’t think people who are seeking greater opportunities have any desire to trample on the achievements of others. They just know the possibilities would be endless if they weren’t constantly slowed down by so many locked gates.

← Fools On An Artificial Ladder
Collecting Tiny Pieces of the Soul →