In the summer of 1977, my family made the hour-long car trip to the town of Bend, Oregon see the movie Star Wars.

I was ten years old, and I had been waiting for what seemed an eternity to see the movie. In retrospect, I didn’t care so much about Star Wars as I did about fitting in.

By the time I actually got to see it, I was still stinging from the shame I’d experienced when Alice Cannon insisted we play Star Wars in the basement of my house. I knew Alice’s older brother Calvin was a big fan of science fiction, but I hadn’t expected the same from her. In the past, we had spent our time together in a totally different way – such as secretly playing her parents Carpenters albums on the record player so we could lip sync to songs like “Yesterday Once More.”

But that summer, the Carpenters were out and Star Wars was in. And, even though I had no frame of reference, when Alice wanted to play Star Wars, I agreed.

Despite her best efforts to engage me in playing the role of various characters, she finally gave up in disgust when I couldn’t even figure out what she meant when she said “just act like R2-D2.”

So when my parents announced we were finally going to see Star Wars, I couldn’t have been happier. Despite the long car ride, the longer ticket line and our seats in the very back of the theater, I thought my needs had finally been met.

That only lasted until the movie started.

What I did understand was that the Carpenters had probably been correct when they had sung “We’ve only just begun.” I knew that this Star Wars thing was going to last much longer than I wanted.

My dad confirmed my fears as the credits rolled when he said, “Well, it’s obvious they are going to make a sequel.”

Which is why, during the long, dark car ride home, I curled into a ball in the back seat and tried to reassure myself that at least I liked the theme music.  (For the record, I got the sheet music and played it over and over again on the piano that fall.)

All of this is why I found myself sighing loudly this past October when my husband asked me at least three times if I wanted a ticket to the Star Wars: The Force Awakens on opening night.

He seemed so hurt and confused when I told him that I had no idea what I would be doing on December 18 and that buying tickets that far in advance was ridiculous.

Neither he, my children or millions of others thought it ridiculous at all. To them, it was an event for which to plan accordingly. And they did.

To me, the new Star Wars is something else entirely.

It is  a reminder that. sometimes, the things we think we want the most aren’t what will make us happy. What does make us happy is discovering and pursuing our own interests and passions.

As the Carpenters would say, that’s what puts me at “The Top of the World.”

Back in 1993, before my husband and I had children, we went to a lot of movies. We weren’t very picky about what we watched, so I didn’t always have high expectations for some of them. My expectations for So I Married an Axe Murderer were so low they were practically nonexistent.

Not only was I surprised, it quickly became one of my all time favorite movies.

From Mike Myer’s role as Charlie, a San Francisco poet, to his father, who pokes fun at Charlie’s younger brother William and sings Rod Stewart accompanied by bagpipes, to the late Phil Hartman’s portrayal of  Vicky, a tour guide at Alcatraz, the movie really is laugh out loud funny.

It also has a great sound track.

No matter what scene is playing when I catch it on television, I always stop what I’m doing to watch, because it always makes me smile.

Sometimes I just need to watch a movie I’ve seen dozens of times. A movie that I know every line and scene by heart and yet enjoy watching over and over again anyway.

Animal House is one of those movies.

It always makes me smile.

As a Type A personality, I may claim that I look forward to long weekends because they offer the opportunity for a little rest and relaxation. In reality, I’m absolutely horrible at relaxing. I talk about it. Sometimes I even attempt it. But I generally fail at achieving it if I’m not actually away from home. Instead, I feel guilty if I spend more than an hour doing something that has no lasting benefit.

What really makes me happy during a long weekend is tackling chores I normally don’t have time for:  like weeding and yard work. What really annoys me is when I’ve ignored some of these tasks for a long time – too long.

Such was the situation when I decided to tackle a neglected flower garden that included poison ivy leaves as big as my head.

Initially, I was annoyed. But then I felt an incredible sense of accomplishment when I was able to trim the poison ivy off the rhododendron bush.  Not only did the garden look better, but I seem to have avoided any rash – which is an even greater achievement for me.

Recognizing that some of our greatest accomplishments come from appreciating small successes always make me smile.

433I haven’t been able to buy clothes for my children without their approval for years.

While my daughter still wants me to shop with her,  my son has no desire or need to have me around when he’s shopping.

To be honest, this arrangement works well since I have more concerns about what my daughter wears than what my son does.

I’m not being sexist. I just know my son will never cross the line.  Granted, he has an irreverent sense of humor and his clothes tend to represent it, but he has never crossed the line. Instead, his clothing selections are entertaining.

Which is why I broke into a wide grin when he handed me a bag from a recent shopping trip.

One of his purchases was a plain t-shirt with the words “Save Ferris.” I’m not sure whether it was  a reference to the band or the movie but either way, it made me smile.

I always smile when I am reminded of  Ferris Bueller’s Day Off.

When I walked into her office, I told her she looked like Doris Day. She got up and spun around. Then we both broke out into the song “Que Sera Sera” while another co-worker looked on in amusement.

I don’t know what made me smile more: the thought of Doris Day, the song “Que Sera Sera” or the moment itself.

All I know is that all those things make me smile.

When I was a child, my mother took me to Portland to see Mr. Rogers in person. We even have a photo of me sitting right in front of him.

To be honest, I remember thinking I was bit too old for Mr. Rogers at the time.

In hindsight, I think it’s absolutely awesome that I shook Fred Rogers hand.

When I have days that I question why I have to deal with difficult people or whether I’m justified in rolling my eyes at people who collect a paycheck but don’t care about the quality of their work, I just have to remember the words of Mr. Rogers.

And that always make me smile. 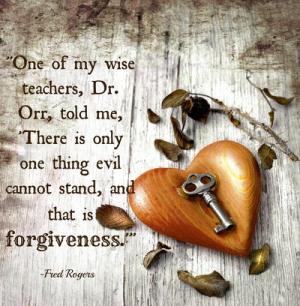 I said The Princes Bride again? He nodded, and together we said, “This is such a great movie.”

No matter how many times we watch it, it always makes us smile.

My daughter may be in seventh grade, but she and her friends still go to all the Disney princess movies. And then they memorize all the songs.

(Should I mention that my daughter is in show choir?)

When Frozen came out, my daughter turned to me when Elsa was singing “Let it Go” and said, “I know she was Elphaba (in Wicked). She has the same voice.”

When we got home, she immediately went to the internet to confirm her assertion. She was right. While on the internet, she also downloaded the Frozen soundtrack from iTunes.

That was in November.

Even today, she is still constantly singing  “Let it Go.”

Which is why, when I saw the clip of a television traffic reporter singing his own version of the song, I doubled over in laughter.

If that can’t make me smile, nothing will.

I love that most children’s movies these days are not only entertaining to adults but often poke fun at the myths on which we were raised.

Take, for example, the 2007 Disney movie Enchanted, in which the an old-fashioned,, stereotypical cartoon princess is sent by the evil queen to modern-day New York City.

I loved that movie the first time I saw it in the theater.

I still love it when I watch it at home. Almost every scene makes me smile.