What Would Dr. Martin Luther King Do?

On Thursday, the man who currently lives in the White House asked a subsequently well-publicized question about why people from certain poor, non-white countries should be allowed to come to the United States.

The very next day, he said the following as he signed a proclamation marking Martin Luther King, Jr. Day, “Today we celebrate Dr. King for standing up for the self-evident truth Americans hold so dear, that no matter the color of our skin, or the place of our birth we are all created equal by God.”

My first reaction was, “That’s our Hypocrite in Chief.”

My second reaction was, “That’s the difference between words that have a direct path from his brain to his mouth and ones that someone else wrote for him to read.”

My third reaction was to wonder how Dr. King would expect us to react. I can guarantee it wouldn’t have been to make excuses for Trump or to accept the horrible things being said about people from other countries.

I was just over a year old when Martin Luther King, Jr. was shot and killed in April 1968, so I have no memories of him. Everything I know is based on what I’ve read or seen on television. I don’t remember ever studying him as part of my public school education, and I was in college by the time a federal holiday was established in his honor.

Maybe the fact that I didn’t get a school-book version of his life is a good thing. I never thought of him as just the guy who gave a bunch of great speeches or even as just a civil rights activist. To me, he was someone who always put people first. And in doing that, he called all of us to think about and respond to the problem of privilege: who has it, who doesn’t, and the role we each play in making or changing that reality.

Being privileged isn’t necessarily a bad thing. Generally, most privileged people aren’t responsible for their own circumstances – they have it because of birth, or marriage, or appearance, or the assistance of someone else. It becomes a problem when privileged people believe that being privileged means they are better and more deserving than others.

Which is exactly the problem with Donald Trump. He thinks money and status and appearance are more important than anything, and he thinks if other people don’t have these things – and lots of these things – aren’t as important or valuable as those who do.

In other words, his belief system is the one Martin Luther King Jr. spent most of his life fighting.

Which brings me back to my question about how Dr. King would expect us to react to Trump. And while I can only speculate, I imagine he would ask the following of us:

The Martin Luther King, Jr. federal holiday is always observed on the third Monday of January. This year, it falls on Dr. King’s actual birthday.

Please, please, please  find a way to honor his words and his actions on what would have been his 89th birthday.

It’s not only the least we can do – it is what we absolutely have to do.

The Swords We Choose 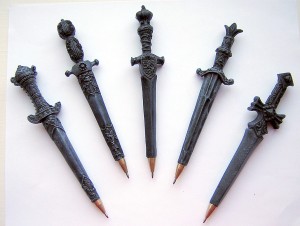 “You need to choose the sword you fall on.”

Those words rang in my ears as I walked back through my office doors.

They hadn’t been said in warning. They were simply the last bits of a conversation with a wise woman who was commenting on my tendency to either push back or push the envelope, challenge the status quo and speak out loudly about my beliefs.

And yet, the words seemed to take on a shape of their own and drift behind me as I braced myself for my next challenge.

Don’t get me wrong.

I’m a firm believer that challenges are great for character development. But they can also be senseless and tragic when created by one group of people against another group of people.

And more and more, that’s the type of  challenge I face on a daily basis.

Earlier in the week, ICE (Immigration and Customs Enforcement) officers conducted raids in my community and took numerous individuals into custody.

For some people, that just means they were following the law. For others, it demonstrates how a complex and outdated immigration system is hurting our fellow human beings. And for some hateful and spiteful individuals, it means that “foreigners” and “illegal aliens” are getting what they deserve.

But to people like me and my colleagues, it means families are being torn apart.

It means children are losing a parent.

It means people who have escaped desperate situations and horrific conditions are losing hope, struggling to navigate a complicated and bureaucratic system and living in fear that they will never see their loved ones again.

And it means that the challenges my colleagues and I face every day aren’t as simple as ensuring that families have housing, food and enough money to pay the utility bills.

The challenges aren’t as simple as advocating for immigrant rights or educating the community about the complicated immigration system in our country.

They aren’t even as simple as ensuring that teachers understand that a spirited debate about “illegal” immigration isn’t helpful when you forget that the child in the back of the room has a father who has just been deported.

The challenges we face aren’t simple because matters of the heart are never simple.

And the art of living with people who have different ideas, different skin colors, different religions, different beliefs and different histories is a matter of the heart.

Unfortunately, my heart has been breaking a little more each time I hear, read or witness another senseless attack on someone who is simply struggling to exist.

Which is the reason I’ve been sharpening that proverbial sword I was warned about.

My sword isn’t intended to hurt people, but, when it’s used correctly, it sometimes does.

That’s because swords were designed for fighting.

My sword is comprised of the words I write about the truth as I see it.  My colleagues have their own swords built on experience, education and passion. And all of us are using our swords to fight against injustice and to defend hearts that can easily break in today’s heated attacks on minorities, the poor and the undocumented.

We may trip and fall on our swords by accident, but there is no doubt that we will ever regret the fight. 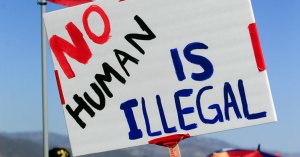 If learning from mistakes could actually increase my I.Q., I’d be a genius.

One of my greatest mistakes has been having an opinion on a topic about which I am very emotional but actually know very little.

And so it is with the issue of immigration.

I work for an organization that serves immigrants and refugees. On almost every work day, I overhear conversations in languages other than English, look into the eyes of beautiful children whose parents came to America in hopes of improving their future, and hear stories about families who fear they will never be reunited.

And so, my heart reaches out for these individuals. But being passionate without facts does nothing to help me speak articulately about the issues.

For that, I called upon my co-worker Brittany Young, an immigration attorney who has both the passion and the knowledge. Hopefully, her words enlighten you as much as they enlightened me.

One of the most common questions I hear about undocumented immigrants, is “If they wanted to come to America so badly, why they didn’t just come legally? “

The question seems straightforward: we have a laws that people should follow, so if you are here without documents, you should just go home.

Many people want an easy solution, like building a wall, but the issue of immigration is too complicated for a simple solution.

Our immigration laws are broken and beyond repair. Limits on the number of available green cards have resulted in backlogs for years, even decades. For example, an unmarried adult child of a U.S. citizen from Mexico will have to wait approximately 11 years before they can gain permanent residency. Additionally, punitive changes in immigration laws passed in the 1990’s prevent many immigrants from seeking green cards.  An undocumented spouse of a U.S. citizen who entered the U.S. illegally has to return to their country of origin to pursue a green card.  Because they have been present in the U.S. for more than a year without documents, if they leave the U.S. to go to an interview, they trigger a ten-year bar on reentering the United States.  They may possibly qualify for a waiver of that bar, but there are no guarantees and not everyone qualifies. So, people get stuck without a viable way to enter the legal immigration system.

As an immigration attorney, I often meet with potential clients only to tell them there is nothing I can do for them despite the fact that they’ve lived in the United States for years and their children are U.S. citizens.

Also, being undocumented in the United States is not a crime. Violating our immigration laws is not a criminal offense. The act of crossing the border is a crime, but the deportation process is a civil law one. Immigration courts, which are tasked with deciding who to deport, are civil, administrative law courts that operate without many of the due process safe guards present in other parts of our judicial system.  Despite the grave consequences, people, even children, represent themselves in immigration court.

Because of that, please stop using the word illegal. It’s is dehumanizing.  Immigrants are people. They are moms and dads trying to provide for their family the best they can while giving their children the opportunities they never had. They are young kids terrified to return to their home country because gang violence permeates every layer of society. They are women who have suffered unimaginable abuse and are seeking safety. They are high school graduates who were brought here as children and are now trying to figure out how to pay for college.

I never look at a single one of my clients and think they are illegal, because they aren’t. They are people just like you and me who are I trying to do the best with what they have. Maybe if we move past the labels and actually sit down and talk to some of these individuals, we will discover that our commonalities outweigh our differences.