← The Language of Our Fathers
The Soundtrack →

All of My Lives

I felt a bit like a cat with nine lives as I glanced at my watch on Friday night.

I hadn’t recently escaped a serious accident or overcome a life-threatening illness. 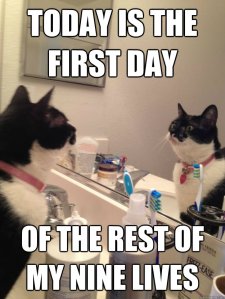 I was just sitting in a high school auditorium watching my son and his friends turn what was intended to be a serious ceremony into something that more resembled a comedy routine. He and his fellow senior marching band members were supposed to be “jacketing” the freshman, which involved putting them into their uniforms for the first time.

As the antics on stage wrapped up, the band director made a short speech. He told the newly inducted band members that they now have a ready-made family as they start their high school journey.

At that point, I could feel my eyes begin to water and my chest tighten. What seemed like only yesterday, my son had been one of those freshmen. Now, in a few short months, he will be graduating from high school.

As I sat in that auditorium, I promised myself I would do all I can to treasure the next few months and the memories that have yet to be made.

That’s when I glanced at my watch and realized that more than 300 miles away, my 30 year high school reunion had just started.

As my son was animatedly and comically stepping into his last year of public education, my classmates from three decades earlier were reminiscing and remembering that time in our lives.

I had absolutely no regrets about choosing to celebrate my current life rather than a previous one.

At the same time, the poignant reminder of the quick passage of time is what made me feel a bit catlike.

My high school years are part of a past life.

I long ago left behind the girl I was in high school.

She existed in my life before college – a time when I learned to form my own opinions instead of parroting the most popular ones.

She existed in a life before I stumbled and failed at numerous adult relationships.

She existed before I learned to keep my mouth shut in order to survive horrible jobs with mean-spirited bosses because I needed a paycheck more than I needed to be happy.

And she existed before I became a wife, a mother and a person who strives to live a life of joy rather than one of fear, to speak out for compassion instead of accepting misunderstanding and to take risks rather than live with regrets.

But I’m here now, and I’m sure my present-life friends and colleagues wouldn’t recognize or even believe whom I was in my life as an 18 year-old.

I can only hope the same for my own children. Although I love them dearly as they are today, I don’t want them to live the same life forever.

Last Friday, as I watched my incredibly goofy son on stage, I also knew that boy won’t always exist.

Life isn’t supposed to be static.

It’s about adapting to change. It’s about seeking out and enjoying as many experiences as possible. It’s about developing new relationships. Most of all, it’s about embracing the inevitable fact that, while nothing stays the same, each moment and life stage should be appreciated for what it can provide.

I wish I could give that advice to the me I used to be, but I can’t. All I can do is share it with my children.

Whether they choose to listen is up to them.

Something tells me that, in their current lives, they probably won’t listen or understand.

But someday, in one of their future lives, they’ll know exactly where their mom was coming from.

← The Language of Our Fathers
The Soundtrack →