← Buck Wild in a Beauty Salon
The Problem With Pretty →

I’m rarely at a loss for words, yet I had nothing to say last week when my daughter asked me the simple question “why?”

Instead of answering, I stood silent as a single tear rolled down my cheek. 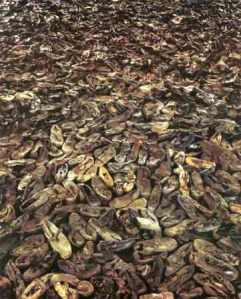 We were visiting the United States Holocaust Memorial Museum.

I’d been there previously, but my daughter hadn’t. She’s been studying the Holocaust in school,  so I thought she was mature enough to fully appreciate the exhibits and the message.

For the most part, she was, and we took our time going from floor to floor as the timeline of events leading up to the Holocaust unfolded. Then we got to the floor with evidence of the Holocaust and all its atrocities.

We stood inside one of the small, bare and unheated railroad cars that transported up to 100 people to the concentration camps. We stuck our heads into one of the actual bunks from Auschwitz. And we stood next to piles and piles of shoes that were taken from prisoners right before they were gassed.

But nothing affected my daughter more than a photograph of braids in a larger pile of hair the Nazis had collected. (They stuffed mattresses with the hair collected at concentration camps.)

Braids define my daughter. She almost always wears her long hair in one or two braids, and this month, she taught herself to french braid. That made the photo of the braids very personal. 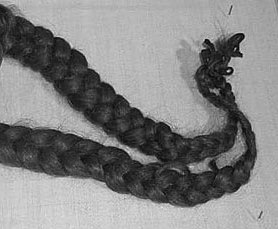 And because of that, I just couldn’t answer her question “why?”

How can you explain to an 11 year-old girl that some people need to point fingers and find someone to blame for difficult times? She lives in a world where that happens on a daily basis. People find it simpler to blame a person or a group of people than they to understand that situations are complicated and are rarely the fault of one person or group.

How can you explain to an 11 year-old girl that some people will simply accept what they read, see or hear when that message justifies their own belief system? She lives in a world where people spew “facts” that are completely inaccurate just because they were presented as the truth.

How can you explain to an 11 year-old girl that some people place their material possessions and personal bank accounts above the health and safety of others? She lives in a world in which people complain that their tax dollars are being used to help those in need.

How can you explain to an 11 year-old girl that some people are comforted by the belief that there is only one legitimate faith. She lives in a world were so-called Christians condemn other religions while claiming ownership of a morality.

How can you explain to an 11 year-old girl that people are comfortable condemning those with different political beliefs and world views? She lives in a world when people use nasty words to define anyone who thinks differently than they do.

And how can explain to an 11 year-old girl that people who loved each other were killed simply for who they loved? She lives in a world where people still claim that some love is an abomination and sinful.

Any explanation I could provide as to why the Holocaust occurred would simply reflect a world in which she lives. And I didn’t want to scare her.

Instead, I scared myself. And no matter how many tears I cry about the Holocaust, I know they aren’t enough to stop the hate that still exists in the world.

← Buck Wild in a Beauty Salon
The Problem With Pretty →