The Smell of Guilt and Regret

When I was about ten years old, I found a starfish lying on the beach and somehow convinced my parents to let me bring it home. I have no idea how I managed that, but I do remember my dad suggesting that we let the starfish “dry out” in his greenhouse.

Dad’s greenhouse was the latest in a series of projects he’d undertaken to pursue his avid love of gardening.

I don’t know why he thought putting the starfish in there was a good idea, but I’m sure he was thrilled with my interest in something involving nature. I’m just as sure that he regretted his decision.

I can’t remember if the starfish ever did “dry out.” What I do remember is the horrible smell that permeated the greenhouse only a few short days after the starfish arrived. I also remember being confused as to why my dad would make such a horrible recommendation.

When the smell was no longer bearable, my dad convinced me that the starfish didn’t belong in the greenhouse, in our yard or even anywhere in Central Oregon. We eventually discarded it, but the stench remained until the greenhouse was torn down. I hadn’t thought of the starfish or the greenhouse for decades until last week when I was out riding my bike and the hot, summer breeze brought with it the whiff of something horrid.

The memory came flooding back.

I shouldn’t have been surprised.

Science has proven that smell is the sense most closely linked to memory and the most likely to elicit strong emotions.

In this case, that emotion was guilt.

But the guilt didn’t last long. I was so very young when the starfish incident occurred. I’ve since made many more and much greater mistakes, all of which have taught me the importance of forgiving myself.

But even more importantly, I’m a mom. I now understand that parenting isn’t necessarily about trying to be perfect in the eyes of our children or about living a life with no regrets. Instead, it’s about teaching our kids that life is one big experiment. And, when things don’t go as planned, we all have to live with and learn from the consequences.

Even when they really stink.

I am making plenty of mistakes while raising my children.

But that’s not necessarily a bad thing.

Most of all, when my kids love me  despite my flaws, they realize that perfection is never a criteria for love. 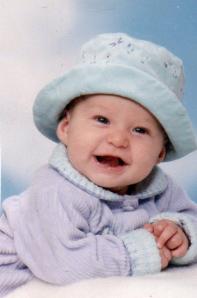 Twelve years ago today, my daughter was due to arrive in the world.

I was positive she wouldn’t.

No one in my family went into labor on time, and my son, who had been born nearly 3 1/2 years earlier, was induced.

I should have realized how different siblings can be.

My son is never in a hurry and takes his time doing anything.

My daughter is more precise, which is probably why she arrived on her due date.

But up to the last-minute, I was convinced she would be born a Virgo rather than a Leo.

My husband loves to tell the story about how I insisted on walking the dogs when my contractions were less than five minutes apart. I love to report my efficient use of the short the time between arriving at the hospital and holding Kendall in my arms.

Twelve years later, my husband and I love our opinionated daughter more than ever.

We also laugh at her first professional baby picture, which shows her attitude at an early age (as evidenced by a certain finger gesture).

And that always makes us smile.

I have absolutely no right to complain about my childhood. I had caring parents, and all my basic needs were met.

In fact, my basic needs were met to such an extent that there wasn’t room for guilty pleasures.

At least that’s what my mom thought.

She was the queen of making sure her children never ate an empty calorie.

Instead of dough, her pizza crust was made of zucchini, and I was 12 before I discovered how great fish tasted when it was fried instead of broiled.

But her biggest concern was our sugar intake.

In hindsight, I appreciate her efforts to convince us that whole wheat, carob cookies with half the sugar were a treat. But as a child, I thought I was being 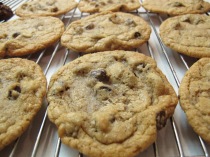 I swore I’d never subject my own children to fake comfort food.

And I never did.

Even though I don’t particularly enjoy cooking or baking, everyone raves about my chocolate chip cookies.

When I was in second grade, my teacher told our class that everyone needed to bring in two pieces of bread for an art project.

The night before the project, my mother wrapped two slices of bread in wax paper, and I carried the slices to school in anticipation of the project.

When art time arrived, my classmates and I carefully followed Mrs. Roth’s instructions. But when everyone else miraculously made bread play dough, I simply made a mess. 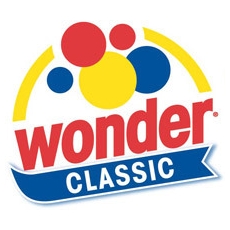 The teacher hadn’t told us to bring store-bought bread, something my family never had. My mom took pride in baking all of our bread from scratch.

And rightly so. Her bread was wonderful. It just wasn’t soft and sticky. Instead it crumbled.

Apparently you need sticky bread to make bread play dough. I think Mrs. Roth felt sorry for me, and initially I felt sorry for myself as well as embarrassed that once again my family had to be different from everyone else’s.

But after a few days, I discovered my debacle during art class made a really good story.

And over the years, I’ve found that being different is much more interesting than being like everyone else and that my greatest failures often become my greatest stories.

And that always wakes me smile.

I am so fortunate to have the gift of my daughter. She is smart and energetic and enthusiastic and expressive.

Like her mother, she shares exactly what’s on her mind.

At almost 12, her topics of discussion range from the characters in the latest book she is reading to her dislike of the dinner menu.

When I’m not with her, she uses text messages to share her opinions. I feel fortunate that she still wants to let me into her psyche, and that always makes me smile.

Day 3: The Ride Downhill after the Struggle Uphill 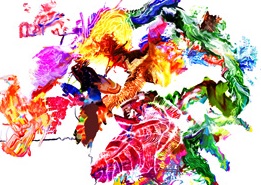 There’s no doubt I love my children.

But at times, when I’m completely honest with myself, I wonder what the heck I was thinking when I decided to become a mom.

It’s not because I regret having children. Not for a minute.

And it’s certainly not out of guilt that as a girl, teenager and even as a young woman, being a mom wasn’t on my list of life goals. Having children helped me recognize what’s really important in life.

It’s because there are times when I think my kids could have done better with another mother – a  mom who isn’t as emotional or head strong  or outspoken as the one they got. A mom who never  purposefully ignores parenting magazines, workshops or other sources of standard parenting advice. A mom who always enjoys her children’s activities instead of attending out of a sense of obligation.

And just when I’ve convinced myself that my kids would be better off  with any mom but me,  I come face to face with parents who don’t understand what an  incredible gift – and responsibility –being a parent is. I witness moms behaving as though they are still adolescents with all the same drama and self-absorption. I have to listen to parents who always blame someone else when their child behaves poorly, gets a bad grade or is fighting with other children.  Worst of all, I  know of parents who put their children’s welfare and safety in jeopardy.

I may be imperfect, but those situations make me feel better about my own parenting skills. At least for a little while… until my kids do or say something embarrassing or completely inappropriate. Then I’m back to thinking that if they had a different mother, their behavior would be stellar.

Such thoughts bounce around in my brain on a daily basis… sometimes at such incredible speed that I fear an impending brain explosion.

The requirements of my profession haven’t helped.

Because I have a social work license, I’m required to take continuing education. Usually, I seek work-related education. Because I recently changed jobs, I’ve been seeking education that is more closely aligned with parenting issues, which I usually avoid.

I’m not sure the plan has worked for me.

In a workshop on bullying, the presenter disparaged parents who tell their daughters that, when a boy teases her, he actually likes her.  According to the presenter, that’s putting her on the path to domestic violence. Having said those exact words to my daughter,  I was convinced that, at worst, I was creating a victim.  At a minimum, I was teaching her that abusive behavior is a sign of affection.

I was back to being a horrible mom.

But then, a couple of weeks later I attended a workshop on child abuse. The workshop emphasized the need for children to feel comfortable questioning and saying no to adults. Now that is something my children have NO problem doing. Could it actually be good that my children are following in their mother’s footsteps by requiring more than just a command as a reason to follow orders?

My internal confusion isn’t necessarily a bad thing, but it does highlight the reason I’ve avoided reading all those articles about parenting. Once  my children started developing their unique personalities, I had to treat them uniquely. And no expert could tell me how to do that.

So while no parenting magazine will ever put me on its cover, that’s not important to me.

What is important is that someday in the distance future, when I’m not the complete embarrassment or the clueless person that my children currently think I am, I will be featured in their life scrapbook .

I don’t even expect to make the cover, but I do want to be featured.

I’m pretty sure I can fill that role quite well… a long as my brain doesn’t explode in the meantime.

Posted in Family, My life, Uncategorized