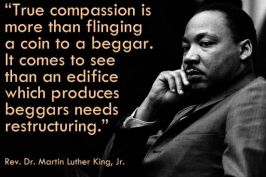 Earlier this week, a colleague stomped into my office expressing indignation about an injustice.

That unto itself wasn’t the least bit unusual. Someone is always stomping into my office to complain about something.

I work for a social service agency with a mission to alleviate poverty. My co-workers and I comprise a group of passionate people who won’t accept that the odds are simply stacked against some people. We try to change those odds.

Often, we feel as though we are tilting at windmills, and we even get discouraged.

And the treatment of one of those heroes is the reason my co-worker was upset as she stormed into my office.

“I can’t believe that the Martin Luther King, Jr. holiday has become just another day for sales for some people,” she said. “The day is supposed to be about honoring of one of the greatest men in history. He changed the world.”

I was a just over a year old when Martin Luther King, Jr. was assassinated, so I never knew a world that hadn’t been impacted by his actions, his words and his ability to change the system. But for years, what I knew about him was limited:

Those facts paint a picture of a great man who made a difference in the world. But those facts never really inspired me because I couldn’t relate to the charismatic leader. His ability to make such a huge difference in the lives of others had absolutely nothing to do with my potential.

At least, it wasn’t until I learned that he, like the rest of us, struggled with imperfections.

He apparently tried to commit suicide when he was 12 years old. His grandmother passed away after a heart attack while King was off disobeying his parents by going to watch a parade after they had prohibited it. When he got home and learned that his grandmother had died in his absence, he jumped out a second story window.

Martin Luther King, Jr., the man who delivered one of the most iconic speeches ever, received a C in a public speaking class during his first year in seminary.

King is rumored to have had numerous extra-marital affairs, which  even resulted 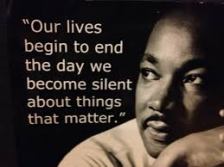 in his becoming a target of the FBI.

On the day he was killed, King was out on that now famous hotel balcony because he was smoking. He tried to keep the fact that he was a smoker hidden, so he didn’t want cameras around when he had a cigarette in his hand. According to Rev. Kyles, after King was shot but before he was taken away by the ambulance, Kyles removed the package of cigarettes from King’s pocket and got rid of the cigarette butt. This was an attempt to hide the fact that King was smoking at the time he was shot.

None of these facts minimize the accomplishments of Martin Luther King, Jr. In fact, in my eyes, they make them even more impressive. Like all of us, Dr. King struggled with being imperfect. But despite that, he changed the world.

He is my hero not just because he acted on the same beliefs that I hold dear. He is my hero because he didn’t let his imperfections get in the way of  taking action and changing the world.

This Monday, when the United States celebrates the federal holiday that honors Dr. Martin Luther King, Jr., that’s what I’ll be thinking about.

I’ll be remembering that ev 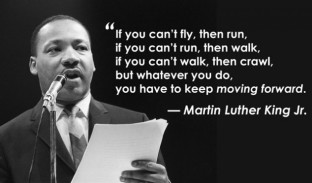 ery person who makes a difference in the lives of others has a personal story lying just beneath the surface. These are the stories that involve failing from time to time but persevering anyway. They involve making mistakes or saying the wrong thing while we still attempt to do the right thing. And even though many of us feel like we are trying to lead when no one is following, we have to keep trying to blaze trails anyway.

These stories sometimes aren’t visible to those around us because we try to hide them just beneath the surface. But these are the stories that make us strong enough to take on the world and try to make it a better place. 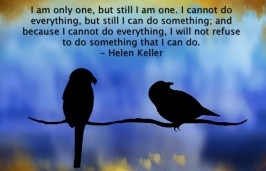 There is something incredibly inspirational about  people who overcome great odds, and, in the process, make the world better place for the rest of us.

Most of these individuals didn’t just do great things, they also said great things. Their words will be inspiration for generations to come.

As a young girl, I became fascinated and inspired with the story of Helen Keller. I always figured if she could do great things, maybe I could too. And even though she couldn’t hear or see, she could still express herself beautifully.

Her story always makes me smile.

My Brief Encounter With the Perfect Imperfection of Maya Angelou

I am an incredibly imperfect woman living in a society of people who hide their imperfections much better than I do.

Some are better able to hold their tongues. Others have achieved such brilliant success that it hides any inadequacies. And then there are the people who spend a great deal of time and energy covering up any deficiencies.

Since my tongue often seems to engage before my brain, my successes are nothing out of the ordinary and I choose to spend my time and energy just being me, I don’t mind that people know I’m far from perfect.

Despite that, I’m always striving to become a better person. For that, I need inspiration, which most often comes from other admittedly imperfect women.

These are the women who make me believe.

My inspiration comes from women who have overcome barriers and have an honest compassion for those who are still struggling.

And, of course, my inspiration comes from women who can express all this in writing — women like Maya Angelou. 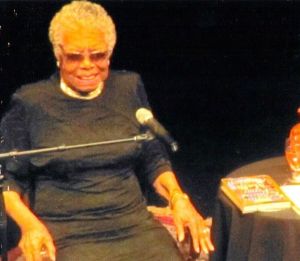 Despite her splendid poetry and prose, her insightful observations of human behavior and the reverence she must encounter everywhere she goes, Maya Angelou doesn’t deny who she is: an imperfect woman who has struggled but, through the support and encouragement of others, done the most she can with the gifts bestowed upon her.

Last week, she shared both her humility and her humor with an audience in Charleston, West Virginia at an event celebrating the 100th anniversary of the YWCA.  Thanks to an invitation from a friend, I was fortunate to be in the audience as she poked fun at herself, challenged all of us to empathize with those who are different and encouraged us to think of possibilities.

She talked about her years of silence following the conviction and murder or the man who raped her as a young girl and how poetry freed her. She encouraged us to always find something to make us smile and, when we can’t, to write about something that does. And, she lectured about not blaming others for past injustices but rather thanking those who endured them and taking responsibility for future generations.

In short, she was amazing. I was either laughing or crying the entire time she was speaking.

And then she read her poem “A Brave and Startling Truth,” which she wrote in honor of the 50th anniversary of the United Nations. About halfway into the poem, she lost her place. She faltered, fumbled then regained her composure as she finished.

I know during those moments of silence while she searched for her place, all of us seated at the Clay Center for the Arts and Sciences were holding our breath. She had earlier reminded us that she is 84 years old, and that fact sunk into our brains and into our souls.

The moment was brief, and it passed. But it had still occurred.

Yet, at the end of the evening, Dr. Angelou held her head high, showed appreciation for the applause and ended her talk with dignity.

Some might think she was trying to cover her mistake, but I know she was simply demonstrating why she is so great.  Instead of being defined by her mistakes and struggles, she soars through self acceptance and overcoming challenges.

If that’s not inspiration, I don’t know what is.