When Silence Is NOT Golden 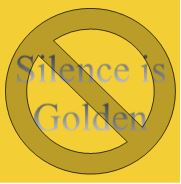 For months, I’ve had an ongoing debate with myself that goes something like this:

Me: I need to tell everyone exactly what I think about President Trump and the antics of the WV State Legislature because their rhetoric and decisions are pandering to hate, greed and hypocrisy.

Also Me: There’s no reason to write about my opinions. I’m not going to change anyone’s mind. It’s just a waste of time.

For a while now, “Also Me” has been winning.

Then two things happened. First, I was privy to a debate regarding whether or not an organization should issue a public statement about the egregious comments made by a state legislator. The second was a brief conversation with my neighbor.

The issue concerning remarks made by state legislator Eric Porterfield began a couple of weeks ago during a debate in a legislative committee about a bill to add protections for sexual orientation and gender identity. Not only did Porterfield make scathing comments about the LGBTQ community, but he subsequently defended those comments to the point of likening the LGBTQ community to the KKK. Much to the embarrassment of many West Virginians, the story went national, and individuals and groups from both sides of the political aisle condemned Porterfield’s comments.

The organization with which I am affiliated also decided to publicly condemn his comments. The statements didn’t go without some internal debate. A few individuals believed that Porterfield shouldn’t be given any additional attention for his hate-filled rhetoric. To me, the public condemnation was important. While I didn’t like keeping Porterfield in the spotlight, I was more opposed to keeping silent about any form of hate speech, particularly against a community that has fought so hard for equal treatment.

And only a day after that realization, a neighbor stopped me to casually ask why I wasn’t writing my blog anymore. I hemmed and hawed about being too busy, but I didn’t say “because I started to feel like what I have to say doesn’t matter.”

I’m glad I didn’t, because her response was, “I miss it. It’s good to know that other people think like I do.”

And I realized she was right.

So, even though I’m probably never going to change anyone’s mind about what matters, I can lend support to all like-minded souls about the current state of affairs in our country.

So this is for them:

I’ve been wanting to write about something that happened to me last Monday, but, up until just now. I haven’t been able to.

I could use the excuse that I’ve been busy (which I have been), but I’ve never before let that prevent me from writing about something so incredibly important.

The real problem hasn’t been lack of time. It’s been a lack of words.

I just don’t know how to write about hate.

You see, last Monday morning, a man came into my office and spewed racist venom at me.

I sat in shock as he got up in my face and yelled at me about using agency money to help Hispanic and black people. He even accused me of not caring about white people. Despite my efforts to be calm with a clearly irrational person, I admit glancing down at my arm and saying, “You do realize that I’m a white person, right?”

He couldn’t hear me. He was too absorbed in his own anger.

And, other than simply waiting out his verbal assault while my colleagues tried to decide what to do, I was powerless.

I can’t imagine how I would have felt if my skin color were darker.

I used to think I understood the problem of racism.

At age five, I cried on the first day of kindergarten when I discovered that I was the only white child in my class on the Warm Springs Indian Reservation.

But my parents and teacher (who was also white) rushed to my rescue. They had the only other white child in kindergarten transferred into my class so I felt more comfortable. I can only imagine how the man in my office would react if a Hispanic of black family had done something similar for their child.

By first grade, my parents moved our family off the reservation, and my class was full of kids who didn’t make me self-conscious about the color of my skin, eyes, hair or culture.  As I moved from childhood into adolescence, I claimed to have experienced racism because I had been one of only two white kids in my kindergarten class.

I hadn’t. My limited experience didn’t even come close. Being a different color doesn’t equate to racism if you still have power. And my family had the power to get me out of a situation that made me feel uncomfortable.

But I didn’t feel as though I had any power last Monday.

I was in an office with no escape as the angry man stood between me and the door. I was in a situation in which reasoning and rational discussion couldn’t resolve the problem. And I was face to face with an individual who truly believed in a social hierarchy based solely on physical characteristics.

No matter how calm my voice was as I repeated the mantra “We care about all people here. We don’t care about their skin color or their religion,” I felt powerless.

When the man finally left, I rehashed the incident with my co-workers, expressed relief that he hadn’t been carrying a weapon, implemented a safety plan and complained that the current political environment is empowering bigots.

But I never doubted my convictions or the words I’d said to him.

He may have tried to intimidate me with his hate, but my words of love actually had more power – of that I have no doubt.

Hate might come knocking on my door. Sometimes, it might even walk in. But I will never, ever allow it to stay.

And knowing that makes me feel incredibly powerful. As it should.

The caller was warning me that a self-important person was bad-mouthing me behind my back.

I wasn’t surprised, nor was I worried. In fact, at this point in my life, I didn’t much care.

I’ve had others slamming me for my successes ever since I broke the curve on tests back in junior high school. Heck, I once had another woman spread horrible, untrue rumors about how I treat others just because I got the job she wanted.

So, on Friday afternoon, when I was informed that I was being disparaged for playing well with others to improve a situation, I was only slightly irritated and a little bit sad for the woman who was maligning me.

I wasn’t being criticized for doing anything hurtful, mean-spirited or even self-serving. I was being cut down for succeeding at something that the other woman, for years, has failed to do.

And so, before I hung up on my caller, I told her not to worry. The hater’s words and anger had nothing to do with me and everything to do with her own unresolved issues. For years, she has demonstrated a pattern of trying to undermine strong, accomplished women.

But long after the phone call had ended, I couldn’t stop thinking about all the hate that’s permeating our current social and political environment. I continue to be astonished that so many people feel bad enough about themselves or their own situation that they are compelled to embrace raw hostility toward others.

Despite my initial desire to respond to vitriol with my own harsh words and behavior, I can’t let myself fall into that trap.

Doing so will only contributes to a cycle of negativity.

I speak from experience. At a political forum just this past week I found myself reacting to the ignorance of local politicians with my own derogatory, side comments. And then I immediately felt bad about myself.

Does that mean I should accept bluster, disdain and outright cruelty? No. I refuse to do that.

Something has to change, and being kind in an unkind world seems like a long-shot.

Then again, millions of people have embraced the message of two beloved authors, Charles Dickens and Dr. Seuss, who both wrote stories demonstrating that material possessions can never make a person happy and that kindness can change the hearts of completely selfish individuals.

And if witnessing the compassion of others can turn the souls of  Scrooge and the Grinch inside out, then maybe, just maybe, there’s still hope for all the other haters in our country.

Which is why, when I go back to work on Monday, I’m not going to let the hater prevent me from doing what is right, saying what is true, and most importantly, living a life that I know would meet with the approval of Mr. Dickens and Dr. Seuss.

And I challenge any hater to say something negative about those two.

Posted in My life, people, perspective