← Too Close For Comfort
Beyond Appearances →

For Just One Perfect Moment 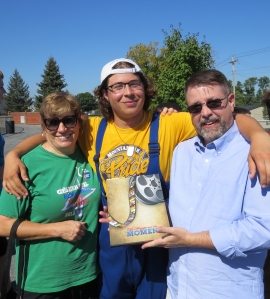 During all of my nearly 50 years, I can recall only one time that I literally stopped to think “This is one of the moments that I need to treasure. I need to store it in my memory right next to my heart so I can pull it out when times are tough. I need to remember how the sun feels on my skin and how I’m surrounded by people who only want the best for me. I need to capture the absolute essence of happiness that is permeating all of my pores so I can remember that life’s most important moments aren’t always big events but sometimes rather uneventful instances that actually mean everything.”

These thoughts came to me on a warm spring afternoon my senior year in college. My friends and I had skipped class to spend time at the lake at Strouds Run, a state park near the campus of Ohio University. My future was a complete unknown, and I had absolutely no idea where any of us would be in just a few short months. I had little if no money and no prospects for a job. And yet, I was completely happy to focus on enjoying an absolutely perfect moment.

It was so perfect that now, nearly 30 years later, I still remember how I wanted to hold on to it forever.

After that, life got more chaotic and often more serious. New people entered and exited my life. Circumstances changed often and significantly. And I changed.

Amid all that, I never again stopped long enough to recognize the importance of  pausing to breathe in then hold on to a simply perfect moment.

That’s not to say I didn’t appreciate such moments. I did.

But there is a difference between appreciating something and treasuring it.

Maybe that’s because, with my son in college, I’m thinking more and more about that time in my life. Or maybe that’s because in two weeks I’ll be going to my college homecoming and reuniting with friends I haven’t seen in almost 30 years. Or maybe (and this is what I choose to believe), it’s because I’m tired of always worrying about what will happen when those perfect moments end and the complications, heartache and struggles return.

Because they always return.

But I’ve now lived long enough to know that the return of life’s problems provides even more reason to embrace those moments when all seems right with the world.

And I had one of those moments today.

I hadn’t seen my son since the beginning of August when he left for band camp at West Virginia University. With the exception of a few texts and posts on social media, my husband and I haven’t heard much from him. But today, the Pride of West Virginia WVU marching band made a stop in our town in route to a game at Fed Ex Field.

We joined a handful of other local parents and fans as well as students from three schools to watch the band perform. When the show ended, we waited until the musicians had taken their instruments to the buses before coming back into the stadium for bag lunches.

And that’s when I saw my son for the first time in almost two months.

He broke into the same wide grin that he used to give me when I was picking him up at preschool. He doesn’t smile like that much anymore, and I don’t think it’s been captured on camera since he was a toddler. But he was looking right at me, broke into that wide smile and said “Hi Mom!”

And before I walked over to him for a hug and a photo opportunity, the me I used to be started whispering in my ear. She told me to treasure that moment. She told me I needed to  store it in my memory and right next my heart so I can pull it out when times are tough. She told me I needed to remember how the sun felt on my skin and how I was fortunate to have people who care about me. And she told me that life’s most important moments aren’t always big events but sometimes rather uneventful instances that are measured by the smile on a child’s face and a love that is greater than any problem we will ever encounter.

And I listened to her.

← Too Close For Comfort
Beyond Appearances →