← The Bridge that Mrs. Henderson Built
The Rainbow Connection →

I’d be lying if I claimed I never stereotype people. But I am being completely truthful when I say I come by those unfair stereotypes honestly.

That is, they aren’t based on propaganda or how I was raised. They are based on experience.

Take, for my example, my instant assumption about women who wear fur coats and multiple diamond rings on their fingers. There’s a reason I automatically label them as being self-centered.

Years ago, on a bitter cold December day when I was in my twenties and living just on the right side of poverty, I spent my entire lunch hour

waiting in line at the post office. I was hungry and irritated, which are generally interchangeable for me. I was also uncomfortable and sweating.  The temperature in the post office had been bumped up to fight against the frigid temperature outside, but I was wearing my winter coat. I was also carrying numerous packages and simply hoping the line would suddenly advance.

It didn’t. Every customer had multiple packages, and, even though we were smack in the middle of the holiday rush, there were only two clerks working at the counter. As we inched forward, I tried to find ways to amuse myself. Since this was in the days before smart phones, I counted the tiles on the floor and made up stories about the other customers. I even tried to strike up a conversation with the person in front of me, but he was even more irritable than I was.

And then, she arrived.

The woman wearing the fur coat and lots of diamonds swept (yes, she really swept) into the post office with an armful of packages like the rest of us. Only, unlike the rest of us, she took one look at the line and loudly announced, “I don’t have time to wait in line. I have a lunch appointment.” And then she simply walked to the counter and insisted she be served immediately.

While the rest of us stood with our mouths hanging open, the clerk accepted her demands and began processing her packages. She swept out in a manner similar to the way she had swept in. Only now, unlike the rest of us, she no longer carried packages.

And she never apologized.

From that time on, I labeled women who wore furs and diamonds as entitled.

In years to come, I would hear others use that same word to describe individuals and families who have depended on government assistance. And I would always cringe. 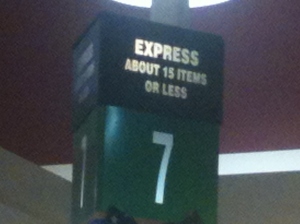 But this week, I had an eye-opening experience.

I was picking up a few things at the grocery store and was checking out in the express line with my seven (yes, I counted them) items. As the customer in front of me finished checking out, a women walked in the door of the store.

She had rather straggly hair and was dressed in cheap clothes. The little girl tagging along behind her didn’t look much better.

Instead of getting in line, she glanced at me then entered the check out line where most people exit. She simply walked between me and the man who was checking out. The clerk also glanced at me, as though unsure what to do. But the woman took control of the situation. She ordered three packs of cigarettes and then, when asked if she was using a debit or credit, almost rebelliously said “credit.”

I was disgusted. She had blatantly cut in front of me to charge cigarettes. And she had done it with a child in tow. She behaved as though she were…entitled.

And that’s when I got it. I understood how one experience can easily shape our opinion about all people who look or act in a certain way. And I understood that entitlement has absolutely nothing to do with social or economic class and has everything to do with individuals who think more about themselves than about others.

And neither one is right.

← The Bridge that Mrs. Henderson Built
The Rainbow Connection →