← A Letter to Rush Limbaugh (Even Though I Know He Won’t Read It)
Moving On, Missed Opportunities, and Making Memories →

Philosophical Thoughts From a Feminist in High Heels 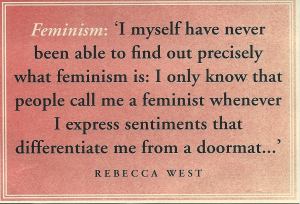 There are times when I wish I could be one of those women content to accept that the world is unfair and that some people are more important than others.

If I could actually believe that, life would be so much simpler.

The problem is that simple bores me and unfairness angers me, especially when it’s perpetuated by people who use inequality to meet their own need for influence, power and/or sense of security.

Even though I hate discrimination of any type, my personal experiences are limited to dealing with sexism. And lately, we seem to be moving backwards on that issue.

Women are facing more sexist attitudes than we did when I was in my twenties. At least it feels that way. Maybe because when I was younger, I attributed personal slights to my being inexperienced. But now, I’ve got a whole lot more  experience yet the attitudes and behaviors persist. And women are having to fight battles I thought we’d won years before.

Admittedly, I’ve been more passive than I should be.

As someone who would sleep in high heels if it were feasible, you’d think I’d find this piece of information encouraging. Not at all.

The whole issue is absurd. The height of a woman’s shoe shouldn’t matter at all as long as she can do her job. But apparently it does. And since women have a lot more choices than men when it comes to footwear, we are also more likely to make decisions that can distract from our skills and abilities.

The same can be said for words we use to describe ourselves. Take, for example, the word feminist.

There are those people who picture a feminist as a woman who hates men, doesn’t shave her legs, dresses like a hippy and has extreme points of view about reproduction.

Umm.. no.  As a feminist, that doesn’t describe me at all.

I love men. I shave my legs. I wear make-up. I’m not an extremist on any subject, and I even let my daughter play with Barbie.

Being a feminist has nothing to do with how I dress or who I love.

It’s about taking time to question how women are being treated. It’s about ensuring that, when other factors are equal, women are given the same opportunities as men. It’s about pushing people to think about how fair they are being.

Would the salary be the same if a man had the job?  Does a woman really have the same opportunity to break into the “good old boys’ network? Is the  spouse’s employment relevant?

Ironically, as I was writing this, my daughter looked over my shoulder and asked, “What exactly is a feminist?”

“It’s someone who believes women should have the same opportunities as men,” I said.

“Duh,”  she said in a voice and manner that only 10 year-old girls  can get away with.

And hearing that one word come out of my daughter’s mouth put the fight right back in me.

Watch out world, this feminist in high heels is on a mission to ensure life is more fair for her daughter.

← A Letter to Rush Limbaugh (Even Though I Know He Won’t Read It)
Moving On, Missed Opportunities, and Making Memories →