← The Problem
Life Is Chaotic – Listen to the Peeps →

Most people would have thought that the contents of the cardboard box weren’t worth anything.

But I knew better. The box was actually a treasure chest full of hopes and dreams. It was a haunted place full of memories and ghosts. And most of all, it was a reference guide for my family history.

The box was the last of my inheritance from my grandparents. As the unofficial family historian, I’d already been given many of their photo albums, framed photos and scrapbooks. But the box wasn’t organized. It was a jumble of pieces of paper, dance cards, newspaper clippings, marriage certificates, medical records, death certificates, and even some property deeds.

It had sat for years in the corner of my bedroom gathering dust while I told myself that someday I would get to it.

That someday arrived on a rainy Saturday afternoon when I was feeling a bit down and questioning my role and place in the universe. To occupy my mind, I dragged the box out of the corner and began looking through the contents.

There were pages from an old address book with names and birth dates in my grandmother’s spindly handwriting. My grandmother was left-handed and had been raised to believe that  being left-handed was deviant. Her teachers had forced her to learn to write with her right hand. Up until her death, she always wrote with her right hand even though she favored her left to do other tasks. As I turned over page after page with that handwriting, I reflected on how my two left-handed children have complained about being raised in a world designed for right-handed people. Yet no teacher ever made them use their non-dominant hand to write. I also wondered if being left-handed is a gene and if they had inherited it from their grandmother.

As I continued riffling through the contents of the box, I picked up a piece of 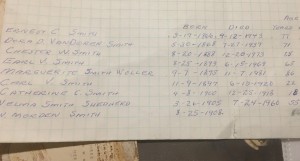 graph paper with my grandfather’s precise printing. He was never diagnosed, but everyone in the family agrees that he suffered from obsessive compulsive disorder. One of his greatest obsessions was whether he would live longer than the other members of his family. On the paper, he had listed the names of his parents and each of his siblings along with their date of birth, date of death, and how old they were when they died. Next to my grandfather’s name, someone had penciled in “86.” For the record, my grandfather died only a few days short of his ninetieth birthday

Other random items in the box included a napkin from my great-grandparents fiftieth wedding anniversary in 1952, pages that had been ripped from an old family Bible, my grandfather’s retirement letter, my great-grandfather’s last will and testament and the deed to a family farm purchased in 1839.  All of them pieces of my family history.

Near the bottom of the box I found the program from my grandmother’s 1932 college graduation during the Great Depression.  My grandmother didn’t come from wealth. She had been raised on a farm and had worked her way through college. She met my grandfather there, and after they got married, she never had paid employment. I’ve asked my mother more than once why Grandma worked so hard to get a college degree but never used it. My mom always had the same response, “It was important to her, and getting a college degree isn’t just about getting a job. A job isn’t the only way you can use your education. Your grandmother used hers throughout her life.”

As I had emptied the box, I realized that, despite my life long interest in history, it was never the actual events that interested me. I was fascinated by the people who were part of those events.

My family will never be in any history books. In the eyes of others, they were just ordinary people with ordinary problems living their ordinary lives.

But to me? The world wouldn’t be the same without them. They are threads in the same tapestry of life that I and my children are now helping weave.

And that, just like the contents of the box, is priceless.

Posted on February 8, 2020, in Family, history. Bookmark the permalink. Leave a comment.

← The Problem
Life Is Chaotic – Listen to the Peeps →