← Patterson’s
Would Anyone Miss Mrs.? →

In a life that requires me to fully participate on an almost constant basis, I truly appreciate days when I can simply be the observer. At those moments, I have the luxury of recognizing how total strangers are always touching my life. 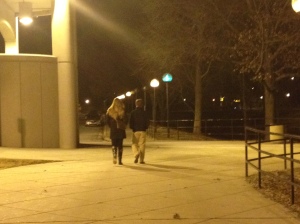 Generally, we pass each other unnoticed – like the drivers and passengers in the vehicles on the roads and interstates that we travel on a regular basis.

Sometimes we barely brush against each other – like the shoppers in line at the grocery store or the other patients in the waiting room at the doctor’s office.

But every once in a while, when I have the opportunity to be more observant, complete strangers can provide insight, spark curiosity or simply remind me that sometimes the world is much less random than I generally think it is.

So it was last Saturday.

My son was spending the weekend playing music at a local university, and my husband was working. Recognizing the opportunity, my daughter suggested we “do something.”

What Kendall was really suggesting was that we “go shopping.” But having spent plenty of time and money shopping during the recent holiday season, I suggested we go into the city instead.

In our case, “the city” is Washington D.C., which offers plenty of opportunities to “do something” without having to “go shopping.”

She agreed, and, after dropping my son off for his music audition and subsequent day of practice, we headed to the Metro Station.

As we parked the car and headed toward the entrance, I noticed a young couple walking in front of us. I don’t know why I noticed them as they were quite ordinary. The boy (he looked like a boy to me although my daughter insisted he was at least 20) wore khaki pants and glasses. The girl, who was slightly taller than him, wore boots and a black coat. We lost sight of them as they punched in their SmarTrip cards while we had to purchase Metro farecards.

After changing trains once, our first stop was at the National Archives. As we crossed the street toward the ornate structure, Kendall poked me in the ribs and giggled.

The couple we had first seen as we left our car and headed toward the Metro Station was once again in front of us. I don’t know if I was more surprised that our destination had been the same or that my daughter had also noticed the pair.

Kendall and I soon forgot about them. As we went through security at the Archives, she was incredibly amused by the security guard who tried to put some humor into the “no photographs can be taken” rule.

While Kendall was amused, his words made complete sense to me. In this day of constant access to cameras, you have to be as clear as possible. Even more importantly, people really understood and heeded his words.

They were also polite as we all patiently stood in line to see the most popular documents on display: the original Declaration of Independence and the U.S. Constitution. But that peaceful order was disrupted when a group of young beauty queens (they advertised this by wearing sashes inscribed with their titles) and their mothers entered the rotunda. The girls pushed their way through the patiently waiting crowd to see the prized displays. I was reminded of the spoiled Veruca Salt in Roald Dahl’s classic novel Charlie and the Chocolate Factory but kept my opinion to myself, even when one of the mothers encouraged her daughter to crowd her way to the glass cases that displayed the Constitution.

She had a point, and her words made a lasting impression on me.

After getting our opportunity to see the documents (with no pushing involved), Kendall and I were debating where to go next when we noticed that the couple from the Metro were now patiently waiting in line to see our nation’s beloved documents.

Kendall gave me an amused look as we decided to head to the National Gallery of Art. Our short walk there wasn’t without incidence. As we approached the corner of Madison Drive and 7th Street, we heard yelling. The reason soon became obvious.

A man in a pink (yes pink) funnel cake truck was yelling at a security guard to let go of the handle on his truck door. “You are going to break the door!” he yelled. The guard had a bemused look on his face and a hand on holster.

“You need to move your truck” that security guard yelled back. I didn’t know how the driver could move his truck when the security guard was gripping the handle so tightly, but that was none of my business.

The yelling continued when the guard noticed all of us on the sidewalk.

“Civilians stand back!!!” he yelled.

We did. My heart was thumping as I willed the red hand on the crossing light change to white.

And the crossing light did not change.

Then, out of nowhere, two police officers appeared and told the guard to put away his gun.

That’s when the crossing light finally changed. As we walked away, I could hear the funnel cake guy yelling, “He’s tripping! Did you see that? He’s tripping.”

She had a point.Their anger and potential violence were totally unrelated to criminal activity and demonstrated the power struggles that so often precipitate violence.

As Kendall and I walked into the the National Art Gallery, my heart was still beating faster than normal. Fortunately, the peaceful halls soon calmed it. Unfortunately, we didn’t have enough time there. But then, we wouldn’t have had enough time even if we had arrived when the museum first opened. We were awed by the paintings by Leonardo da Vinci, Renoir, Monet and Manet.

We weren’t so awed by the work of Jackson Pollack.

“I just don’t get it,” I said as we stared at a painting that looked like paint dripping. I got as close as I could, staring at the paint and feeling a bit like Cameron staring at the painting in Ferris Bueller’s Day Off. The more I looked, the less I saw. I wasn’t the only person who didn’t “get it.”

Kendall and I were joined by two college-age women, one of whom who was questioning the artistic value. Her intellectually superior friend tried to put her straight.

“What is aesthetically pleasing isn’t the same as what is artistically lovely.”

I’m sure that meant something, I’m still not clear what. Maybe if I understood Jackson Pollock I would understand her words.

But while I didn’t get her point, I did appreciate that she sees the world in a totally different way than I do.  Besides, I was more interested in the fact that the couple from the Metro Station was now in the same room in the art museum.

We stayed in the building until a guard announced that the museum would be closing in 2,000 seconds. Apparently, humor is part of the training for  Washington D.C. museum security guards.

Kendall and I left, took the Metro to another destination for dinner then finally decided we needed to head home.  Our energy level had dropped with temperature – or so we thought. As we got off the train and were headed to our car, Kendall challenged me to a race. Because I was so cold, I was all in. We giggled as we ran to the car.

Then,  we both stopped abruptly.

There was a couple walking in front of us. The boy wore khaki pants and glasses. The girl, who was slightly taller than him, wore boots and a black coat. Kendall and I giggled and she took a picture on her phone.

That couple will forever be a part of our lives.

They serve as a reminder of all of the strangers we pass each day. Some go completely unnoticed. Some provide us with memorable quotes or life lessons. And some stay with us forever like the shadows in a photograph. Those are the ones that remind us that life’s best teachers aren’t always the most obvious. Instead, they are the ones that require us to take a backseat and observe all that life really has to offer.

← Patterson’s
Would Anyone Miss Mrs.? →