A Portrait of Jesus

This past week, while much of the news focused on Congress, the debt ceiling and the federal shutdown, another story caught my attention. 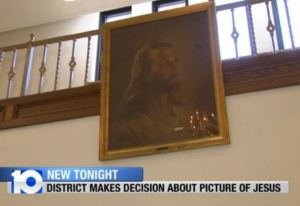 A school district in Jackson, Ohio agreed to take down a portrait of Jesus that had been hanging in a school since 1947. The district is not removing the portrait because, after 66 years, it realized that the portrait might be a violation of separation of church and state. It’s removing it for financial reasons.

In February, the ACLU of Ohio and the Freedom From Religion Foundation sued the Jackson City School District for “endorsing one religion improperly.”  The school attempted to argue that the portrait was part of a “limited public forum” but eventually agreed in court to remove it to avoid “risking taxpayer money.”

“This is why are country is in trouble,” the person wrote. “We are turning our backs on Christianity.”

I couldn’t have agreed with that statement more. I just agreed for entirely different reasons.

I don’t believe many of our leaders or citizens are acting in a way that Jesus wanted.

From what I know about Jesus, he didn’t care about himself. He cared about everyone else. EVERYONE else – regardless of socioeconomic status, criminal status or religion. He simply cared about people and did all he could to help them while trying to teach all of us to do the same.

I can’t imagine the Jesus that I know would care whether or not his portrait was on a wall in a school. My guess is that he probably wouldn’t want it there. He didn’t want his image (or what  a lot of people consider his image) to be worshiped.

The type of worship he wanted was for people to understand his words and behaviors and to practice them every day.

There are those who would argue that the portrait of Jesus in a school was just a reminder for students to listen to his words and to do their best to practice his behaviors. If that is what they believe, I applaud them. But if they are trying to promote Christianity as a religion in which all people should believe, then I do have an issue with that.

I don’t think whether or not someone is a Christian defines whether they are good or bad  or worthy or unworthy. But I do believe that Christianity means that, instead of judging others, we love and care for them.

Which is exactly the message Jesus was trying to teach us: it’s all about how we treat others.