← Will You Sound Bite This?
My File Cabinets Full of Men →

Lessons in Trees from the View on a Bicycle Seat

As a child, I always felt at home among the trees and full of exuberance on my bike.

As an adult, not much has changed.

While my father, a forester, no longer teaches me about the secrets hidden in the shape and color of a leaf or in the texture of bark, I am still enamored of trees. And riding a bike is still one of my favorite pastimes. Few things bring me greater joy than taking a lazy bike ride among the beauty and wisdom of the trees.

I had that opportunity this past Sunday when I took advantage of a gorgeous autumn afternoon to ride my bike and attend to the lessons of the trees. 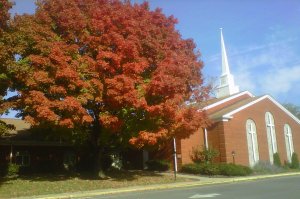 Lesson 1:  Sometimes when you blend in, you bring out the best in others. On Sunday, this tree next to the church across from my neighborhood had started to model its fall colors. It was amazingly beautiful, but its splendor didn’t lie simply in its appearance. Even though I drive by that church every day, I’ve never paid much attention to it. But the hue of the red leaves was a perfect match to the color of the bricks, and I was struck by the church’s design.

Lesson 2: Loss and suffering are the best reminders of all that we still have. The past year was a tough one for trees. Almost exactly a year ago, we were hit by a bizarre October snowstorm that knocked down trees still heavy with green leaves, including two in my own yard. In June, we lost even more trees to a land hurricane, also known as a derecho. For weeks, the sound of chainsaws in the morning was as common as the sound of crickets in the evening. I hated that sound. Every time a chainsaw revved up, I knew we were saying goodbye to another tree. But riding my bike on Sunday, I passed hundreds of trees that had never been knocked down, and I felt a deep sense of gratitude for all those still standing.

Lesson 3: Happiness comes from accepting your circumstances and recognizing that, at times, your place might simply be to support someone else. These two trees in an expansive cornfield have always seemed out-of-place to me, yet each year they grow stronger together. From some angles, they are two distinct trees that mirror each other. From other angles they appear to be one. But from all angles, they remind me of two people who hold each other up in a tough environment that could easily defeat someone left all alone.

Lesson 4:  The greatest sense of belonging comes from owning your own style and surrounding yourself with people who appreciate differences. Every time I pass these three trees on the edge of a field, I imagine them as a group of women all throwing their arms up in laughter. Each is unique: one is flamboyant, one is plain with a toddler at her knee and one is aging rapidly. Despite their differences, I see them as a united group that delights in life’s simple pleasure of friendship.

Lesson 5:  Everyone has scars, but we can choose to let them weigh us down or strengthen us. Several years ago, I fell in love with a magnificent tree that simply owned the landscape. When it was hit by lightning, I was sure it was damaged beyond repair. About half the tree was dead, and several branches hung black and leafless. But this tree didn’t give up and has slowly recovered. It’s now smaller and has a different shape, but in my eyes, this survivor is a giant.

Yesterday, I took the same bike ride that I did on Sunday. The trees had already changed dramatically. Some displayed brighter colors of red, orange and yellow while others were losing their leaves. Most shone in a different light. But these changes gave me one more lesson: savor every beautiful moment, because nothing will ever be exactly the same again.

← Will You Sound Bite This?
My File Cabinets Full of Men →