On Friday, I sat near the top of Seneca Rocks watching rock climbers scale sheer cliffs then rappel down. 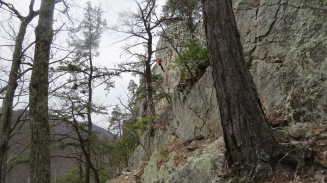 I was avoiding it.

After hiking almost to the top, I told my kids not to walk along the ridge or the narrow trails others were carefully navigating. I imagined how a mere slip could result in disaster, and the signs warning about the number of people who had died on Seneca Rocks didn’t help. They simply fed my fear.

Later, as we were driving home, I thought about my fear.

And I realize that one word “my” said it all.

To me, fear is all about the risk of physical or emotional harm to me or someone I love. I identify that risk and then I do everything I can to avoid it.

That’s how I operate.

My friends tell me that some people don’t analyze their behavior as much as I do.They say most people don’t even know when they are afraid. Instead, they just think they are angry.

Lately, I’ve been debating whether I agree. I never used to think my anger stemmed from fear.

I get angry at injustice when people aren’t treated fairly. Am I afraid that I too can be a victim of injustice?

I get angry when incompetent people are allowed to continue in their jobs despite their ineffectiveness. Am I afraid that my hard work is pointless?

I get angry when people blame me for their inability to be effective. Am I afraid that others will believe them?

My answers to all these questions is”maybe.” But I’ve begun to realize the question shouldn’t be if my anger is rooted in fear. The real question is: “If I am afraid, how do I deal with that fear?”

I can either face it, like the rock climbers do.

I can avoid it, like I did when sitting on the cliffs.

Or I can learn to turn it into something meaningful.

And that choice is the real fear factor.