← Another Excuse for Bigotry
The Rapist with the Great Reputation →

That’s how my grandmother described the day she married my grandfather, Morden, in the chapel at the People’s Church in East Lansing, Michigan with her sister Sylvia and her brothers Martin and Vilas in attendance.

Exactly thirty years after that, at age 26, I was a completely different person than both these women. I was definitely less conservative and more reckless. Yet all three of us would be forever connected not just by blood but by our sensibilities and our belief that a strong marriage, just like a strong woman, is defined by substance not glamour. 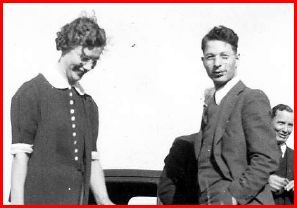 My grandparents met on a blind date while they were both students at Michigan State College (later University) during the Great Depression.  My grandmother was one of four children from a farming family in Quincy Michigan who were all  determined to go to college. Despite the odds and through their own perseverance, all four obtained college degrees.

My grandfather, the youngest of seven children, grew up in a family that had an uneven financial history – sometimes they had a lot, sometimes they didn’t.  My grandfather’s older brother, Carl, had died when he contracted smallpox working in a lab while in medical school. The money from his insurance policy allowed my grandfather to pursue a degree in electrical engineering.

I know little about my grandparents’ college romance.  My grandmother wasn’t a talkative or an emotional woman. But for decades, she documented her life in diaries. The one or two sentence entries she diligently recorded provide some insight into the often hidden thoughts of a woman who, on the surface, was practical to the bone. The grandmother I knew had one dress that she wore to every special occasion (including my wedding) for decades.  But, that didn’t mean she never cared about a new dress.

“Oct. 30, 1932 Sunday. My sweetheart down today. And what did he bring me  – Um does it sparkle? Simply gorgeous delightful! The dear boy.”

Even after my grandmother died, we never found picture of her wedding or her wedding dress.  At the time of their marriage, my grandfather was a relatively new employee at Citizens Gas Fuel Company. My grandparents chose to get married the evening before Thanksgiving because my grandfather would have a four-day weekend.

My grandparents’ marriage ended when my grandfather died in 1998, just shy of their 65th wedding anniversary. My grandmother would live for another seven years.

The words in her diary will be passed on to future generations.

Following in the footsteps of her parents and her older brother, my mother attended Michigan State University. After graduation, she moved to Manistee, Michigan, but neither her job nor her location were exotic or adventurous enough for her. She wanted to see the world and submitted an application to join the newly established Peace Corps.

After he graduated from Idaho State University, my dad, a Massachusetts native who had already seen a great deal of the world while in the Navy, also applied to join the Peace Corps.

They were among the first individuals ever selected and were in the third group deployed. Before they left for Chile, my parents attended training at Notre Dame University, where they spent days in Spanish class. My father excelled with his ability to speak the words perfectly in his  loud, booming voice while my mother shot him dirty looks while she struggled.

Her irritation didn’t last long. Before they returned to the United States, my parents were engaged. Instead of a diamond, my mother wore a simple gold band on her right hand that she would transfer to her left hand when she was married. The only diamond I’ve ever seen my mother wear is her mother’s engagement ring, the one that sparkled so brilliantly in 1932.

After returning to the United States, my father, a forester, got a job in Montana. He hadn’t accumulated any leave, but he was allowed to take a few days for Thanksgiving. And so, a wedding the day after Thanksgiving made sense, and my parents spent their honeymoon driving west to their new home.

They’ve spent the rest of their lives sharing stories of their adventures with their children and grandchildren. 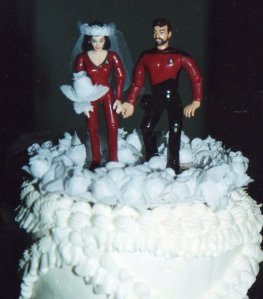 Ironically, I met my husband on a November night.

On  November 8, 1988,  I was a college intern helping cover election results in the newsroom at West Virginia Public Radio. Giles was reporting for his first night of work. He thought I had an attitude, and I thought I had work to do. No sparks flew, and I didn’t give him a second thought.

But after I graduated from Ohio University, our paths continued to cross and our circle of friends became one in the same. Over time and shots of Jagermeister, we eventually ended up together.

Our relationship was nothing like I imagined everlasting love was supposed to be and everything my mother had told me it would be. (She’d told me on multiple occasions that common values  and compromise, not romance, were the key to a successful relationship.)

Giles and I didn’t get engaged out of some romantic notion of marriage. We got engaged because his roommate bought a house, and logistically, our moving in together just made sense.  And when we realized the significance of the year, we picked a very significant wedding date.

Unlike the two couples before us,  we didn’t marry over Thanksgiving weekend nor did we get married in Michigan, Instead, our ceremony took place the Monday after Thanksgiving in Charleston, WV.  And yes, our wedding was also simple and practical (my mother made my dress), but it was also a bit quirky.  We received gifts of Star Trek dinnerware and had Star Trek action figures on top of our cake.

Our children look at the photographs and simply roll their eyes.

This Thursday marks my 19th wedding anniversary and my parent’s 49th. If they were still alive, my grandparents would be celebrating their 79th.

Those aren’t generally noteworthy numbers, but they are to me. Life and marriage are both fragile, and every day, month and year of marriage should be treasured.

I am under no illusions that future generations will  marry on November 29. But I do hope that the  stories from all three couples will serve as a reminder that weddings are not about a fancy show or an exotic honeymoon. They are about two people deciding to move forward together and create memories that can bond families together for generations.

← Another Excuse for Bigotry
The Rapist with the Great Reputation →