← Moving On, Missed Opportunities, and Making Memories
Rocks on the Road and Rocks in Our Heads →

The Misadventures of Mr. Muffet, My Chronically Confused Cat 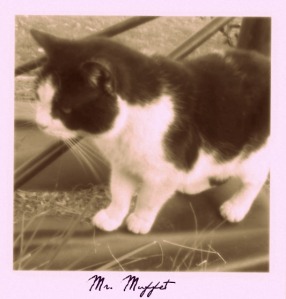 Mr. Muffet was never destined  for greatness, dignity or even a long life.

Quite the opposite in fact.

The moment he joined our family, his fate was sealed.

I was too young to remember how Mr. Muffet arrived at our house or even when his name changed.

All I know is that Mr. Muffet was Miss Muffet until my cat-loving grandmother from Massachusetts visited our Oregon home.  All things considered, my grandmother probably thought my parents were trying to make some kind of statement about gender stereotypes, but she wasn’t going to have any of it.  She told them in no uncertain terms that Miss Muffet was just not an appropriate name for a male cat.

My father, who had previously tried unsuccessfully to breed rabbits, (he was unsuccessful because they were all female) heeded her advice, and Mr. Muffet’s name was modified accordingly. But his status as a full-fledged member of the family never changed.

Which, apparently, is why he went with us on a family vacation to the Oregon Coast.

I was recently reminded of the trip during a conversation with a couple of co-workers.  Both were discussing the trauma of having to ship their cats overseas.

“I’ve never shipped a cat,” I said.  “But I do remember the time my family took our cat to the beach.”

They both looked at me in disbelief.

“Why,” they wanted to know, “would you take your cat to the beach?”

I couldn’t answer their question.  But since cats were the topic, curiosity got the best of me. I had to call my mom and ask why.

“Yes, we did,” she answered. “I just don’t remember why. Probably because cats are easy, and we didn’t want to travel an hour to have him boarded.”

I didn’t even ask why a neighbor couldn’t have taken care of Mr. Muffet. Instead, I pressed on with the bigger issue. “And he pooped in the car, right?”

She was obviously done with the conversation, so I didn’t push the issue.  But I did tell my co-workers that I wasn’t imagining the trip.

Not only did we take Mr. Muffet on vacation with us, but we didn’t even have a carrier for him.  (Were cat carriers even around in the early 1970’s?)  Because of that, he was simply free to move around the cabin.  But he didn’t. He stayed on the vent behind the back seat where my brother and I were riding.

That was either his favorite spot or he was too terrified to move, even when he had to poop. As a result, he pooped in the vent right behind my head.

There is no way to describe 1) the smell, or 2) how determined my mother was to get the mess cleaned up.

My mom was determined for a long, long time.

The good news for Mr. Muffet was that he soon had a lot more places to poop.

Always an equal member of the Bartlett family, Mr. Muffet accompanied us on our first walk on the beach (a beach comprised mostly of sand dunes.)  He probably thought he’d landed in the world’s largest litter box.

He did his best to take advantage of the situation, but after an hour of running through the dunes, scratching in the sand and doing his business, the poor cat was simply exhausted.

Fortunately, our trip home was much less memorable than the one to the coast. Unfortunately, I don’t have many more memories of Mr. Muffet.

He disappeared shortly after the infamous vacation.

For years, I was convinced that a less adventurous family had found and adopted him. I was equally sure that he was quite relieved that he didn’t have to live with my crazy family anymore.

I was well into adulthood before I learned the truth:  Mr. Muffet had been hit by a truck on the highway near our home.

I appreciate that my parents tried to protect me from the facts, but I also think they were trying to protect themselves. I’m certain that the adventures with Mr. Muffet had a significant impact on them.

He was, after all, my only cat growing up. After he “disappeared,”  we only had dogs.  And, I must say, dogs travel a lot better.

← Moving On, Missed Opportunities, and Making Memories
Rocks on the Road and Rocks in Our Heads →