The Ice Gods Are Laughing

If my life came with a dictionary, the definition of irony would be “shattering your wrist on ice only to spend the rest of the week with ice on your wrist.”

Needless to say, I’ve spent the past few days pondering how the same substance  that precipitated the events that led to my shattered wrist could be the same substance that is supposed to help heal it. That’s why I’ve developed a love/hate relationship with ice.

The whole complicated affair could have been avoided last Saturday if I had just used common sense. But even though C is my middle initial, it doesn’t stand for Common sense. Nor does it stand for Clumsy, but at least that would be more appropriate.

As I do every morning, last Saturday, I hooked a leash on my German Shepherd, Rodney.  I then put on my snow boots and took him for a walk in the wintry mix. I even took pictures.

As I entered the nearby park, I slipped on ice, went up in the air and landed flat on my back was my head cracked against the concrete. I got up, rubbing the back of my head and momentarily worried that I might have suffered a head injury. I wasn’t all that concerned and decided the risk of any permanent damage was limited. The risk that I might fall again never crossed my mind. (As I mentioned, the C in my middle name does not stand for Common sense.)

I did text my husband, who was at work in Washington DC, and let him know I’d hit my head and if I started acting wacky he should worry about a concussion. 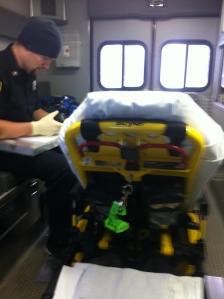 ambulance as I was being transported to the emergency room of the local hospital.

I had continued my walk through the park and the neighborhood on the other side when I went down again. This time, as my feet slid on ice, my right hand instinctively reached to catch me. This was the same arm with a leash attached to a German Shepherd pulling in the opposite direction.

Unfortunately, common sense once again failed me, and I refused to get in the ambulance because my dog couldn’t go with me. The men in uniforms tried to convince me they would take care of him. Rodney didn’t agree and wouldn’t let them come near me or him. Even though I was in agonizing pain, a part of me was proud of my dog for protecting me. Another part of me was amused. And a part of me was frustrated, especially when I was told to tie him up. With only my left hand as my dominant right throbbed in pain. With a short leash. On a wooden fence.

I somehow managed to secure him and to call my neighbor to come get him. In other words, I asked her to risk driving on icy streets to get my dog so the police wouldn’t take him away. She did come. and once Rodney was in her vehicle, I left in an ambulance. I even provided the emergency medical technicians with every possible piece of personal data they requested, thus proving to myself that I didn’t have a concussion.

In the meantime, my husband thought I did have a head injury and was arguing with the neighbor who had rescued Rodney. She said my head seemed fine. My husband said it wasn’t,  and I wad oblivious to his concerns as I posted a photo of my first ever ambulance ride on Facebook.

(To justify my behavior, the activity was an attempt to distract me from pain, but my efforts didn’t work. That’s why I put the phone away and missed my husband’s frantic calls.) 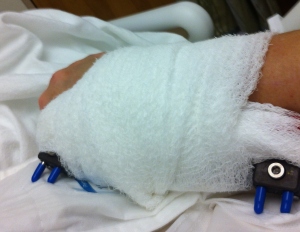 Once I arrived at the hospital, I was diagnosed with a severely shattered wrist.  I was eventually admitted, and surgery was performed Sunday morning. I woke up from surgery with a long metal bar called a fixator screwed into my arm and the potential for more surgery.

On Monday I was sent home with instructions to keep my arm on ice for several days and a warning not to walk on ice.

Which is why, if I believed in ice gods, I’d also believe they are laughing at me. If you listen closely, you might even hear them through the softly falling snowflakes.