If popular culture is to be believed, all of our questions will ultimately be answered when we die.

I may be a bit impatient, but I’m not ready to find out if that’s true. I’m not even all that eager to have all my questions answered.

For the moment, I’m quite content to muddle along and think that wondering is the essence of living.

And wonder I do.

I know there are people who believe there is a master plan or that we just have to trust fate. But, in reality, there are more seven billion people on earth. If even one percent of those people are similar to me, they are constantly doing something random and unplanned that could change everything.

There are just no easy answers about how the universe works.

I first learned that during a summer in the late 1970’s.

My family was spending our summer vacation exploring Yellowstone National Park and the surrounding area.

Knowing my parents, the trip was well-planned. But even the best planning doesn’t take into account when little girls have to go to the bathroom.

My dad grumbled as he pulled our Oldsmobile 98 sedan into a parking spot at a visitors’ information center. As my mother and I headed to the women’s room, we paid little attention to the car with Michigan license place that nosed in next to us.

But my dad was paying attention.

Which is why he chose to watch a slide presentation about some geological event that had occurred at some point in history at our current location. I have no recollection of what the event was or when it occurred. All I know is that when my mom and I sought out my dad and brother, they were watching the presentation.

Or they were at least pretending to watch.

My dad was sitting in a metal folding chair wearing a foolish grin and pointing to the people in front of him.

Those people were my great-uncle Vilas and his new girlfriend, Betty.

Uncle Vilas, who was from the Detroit Michigan area, had visited us once in Oregon, but I really didn’t remember him. My parents didn’t even know he had a girlfriend, even though his wife had passed away years before.

All we knew was that, by some unbelievable coincidence, we had pulled into a visitors’ center in Montana at the exact same time.

After the slide show ended, my mom tapped him on the shoulder. When he recognized her, he was initially shocked then broke into a wide grin. We spent time in that visitors’ center catching up. Then we went our separate ways.

That was the last time we saw my Uncle Vilas. He died a few years later in 1986, but my family always talked about the coincidence.

Then, just a few weeks ago, I was asked to judge a Boys and Girls Club state scholarship competition, and the national coordinator was from Adrian Michigan, where my mother was born. As we talked about the coincidence, I discovered that her parents had graduated from high school where and when my Uncle Vilas was principal.

My immediate reaction was “it’s a small world.” But sometimes, that’s just hard to believe, 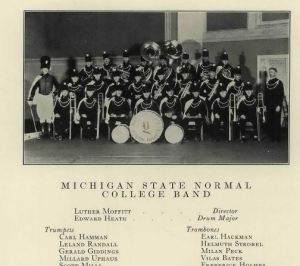 I began to a do a little more family research and discovered that Uncle Vilas, like my son, played a brass instrument in a band. I also discovered that he, like I have, spent his career in service to others rather than in the business world.

I’m still not sure if that means anything more than he seems to pop into my life at the most unexpected moments.

But I’m willing to wait for the answer.