← And Now For Another Lie
The Experiment → 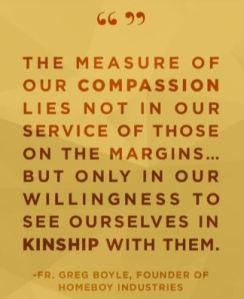 My soul hurts when I think about the incident at a local church. Apparently, the minister provoked a member of his congregation with a sermon about racism. The individual was  so offended, he actually left in the middle of the service. As he walked out, he loudly muttered, “George Floyd was a criminal.”

This happened in a Christian church.

I may not be a Biblical scholar, but the last time I checked, the Christian church is based on the teachings of Jesus Christ. You know, that guy who taught about mercy, forgiveness and taking care of each other? I’m fairly certain that Jesus wanted us to interact kindly with all human beings – not just the people we like or respect or who make us feel comfortable.

I know that’s not always easy, and sometimes I feel as though it’s almost impossible. But labeling someone a criminal and then using that label to rationalize their mistreatment hurts all of us. That’s because we are all connected.

No one lives and shares that message more loudly and bravely than Father Greg Boyle. Father Boyle is a Catholic Priest who founded Homeboy Industries, a gang intervention and rehabilitation program in Los Angeles. I had the privilege of hearing him speak a few years ago, and his words resonated. Like him, I am incredibly fortunate to have a job in which I can learn from people who others might dismiss.

There is the woman experiencing homelessness who once proudly told me she was featured in a documentary about women in prison. She was, and I’ve since watched it. I’ve had her bags of medication for various mental illnesses in my office. I unintentionally taught her to beg in Spanish when she asked me how to say “I’m hungry” and “I need money” in Spanish. She recently stopped by the office to tell my coworkers and me that she had a place to live.  When I opened the door, I had to firmly tell her she couldn’t hug me because of COVID 19. I don’t call her a criminal. I call her a fellow human being.

There is the man who showed up in our office lobby loudly declaring “I just got out of prison and I don’t know where to go for help.” He had grown up in foster care and is functionally illiterate. He is demanding and difficult, but he was also sweet and helpful. He’d give staff cards and help clean our offices. After he went back to jail for rape, he still called the office on a regular basis. I don’t call him a criminal. I call him a fellow human being.

There is the young man with no place to live because his family kicked him out. Before COVID-19, he would stop by the office almost every day to make a cup of coffee. Occasionally, he would use the shower and do his laundry. He was always polite and followed the rules. When my co-workers and I hadn’t seen him for several days, one of us would look on the jail site. His mugshot would be there, and his charges ranged from battery to robbery. He stopped by the office last week to ask for a tent. I don’t call him a criminal. I call him a fellow human.

Do I believe they should be held accountable for their actions? Absolutely! But I also believe that I should still care about them.

As Father Greg Boyle says, “There is no us and them, only us.”

I care about us.

I live in the Eastern Panhandle of WV, with one dog, two cats, a daughter and son at West Virginia University and a husband who works strange hours. When I'm not working as a director at a nonprofit social service organization or being a mom, I can generally be found riding my bike, walking my dog and stirring things up.
View all posts by Trina Bartlett »

← And Now For Another Lie
The Experiment →